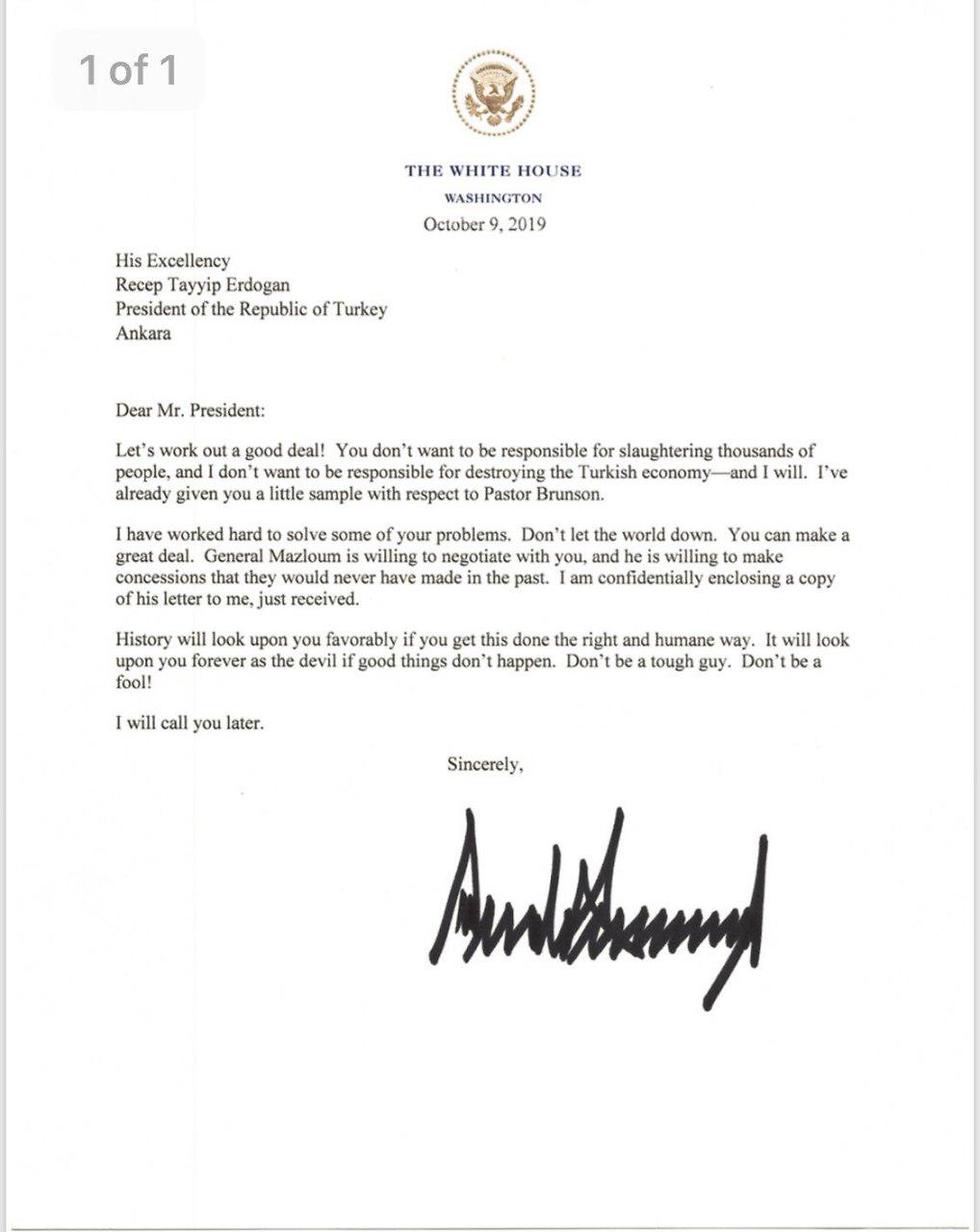 Erdogan 'threw away letter from Trump' calling for deal on Syria

Following a phone call with Erdogan, who has rejected calls for ceasefire or mediation, Trump dispatched top aides including VP Pence and Secretary of State Mike Pompeo to Ankara to try to persuade Turkey to halt the offensive

Turkish President Recep Tayyip Erdogan threw away a letter from President Donald Trump warning him not to "slaughter" the Kurds in its military operation in northeast Syria, according to media reports Thursday.

In his October 9 letter, Trump wrote that history will look on his Turkish counterpart forever as the devil "if good things don't happen" and added "don't be a fool!"

Turkey's week-long assault has created a new humanitarian crisis in Syria with 160,000 civilians taking flight, a security alert over thousands of Islamic State fighters abandoned in Kurdish jails, and a political maelstrom at home for Trump.

Trump has been accused of abandoning Kurdish fighters, who were Washington's main partners in the battle to dismantle Islamic State's self-declared caliphate in Syria, by withdrawing troops from the border as Turkey launched its offensive on Oct. 9.

Trump defended his move on Wednesday and called it "strategically brilliant".

U.S. Vice President Mike Pence will urge Turkey on Thursday to halt its offensive, a day after Trump threatened heavy sanctions over the operation.

Following a phone call with Erdogan, who has rejected calls for ceasefire or mediation, Trump dispatched top aides including Pence and Secretary of State Mike Pompeo to Ankara for emergency talks to try to persuade Turkey to halt the offensive.

Pence is to meet Erdogan on Thursday, while Pompeo and other officials are expected to hold talks with their Turkish counterparts.

Trump said Wednesday he thought Pence and Erdogan would have a "successful meeting" but warned of sanctions and tariffs that "will be devastating to Turkey's economy" otherwise.

Kalin said that Turkey's foreign ministry was preparing to retaliate to the U.S. sanctions.

Trump's critics say the U.S. sanctions so far, including a hike to steel tariffs, a pause in trade talks, and sanctions on the defense and energy ministries, were too soft.

On Wednesday, Treasury Secretary Steven Mnuchin said they could be broadened, while Republicans in the U.S. House of Representatives also indicated a sanctions legislation.

Erdogan has dismissed the sanctions and rejected a global chorus of calls to halt the offensive, which Turkey says will create a "safe zone" extending 32 kilometers into northeast Syria to ensure the return of millions of Syrian refugees and clear the area of Kurdish fighters Ankara views as terrorists.

The Turkish president said Turkey would end its operation when Kurdish forces withdraw from the "safe zone", adding that "no power" can deter Ankara's operation until it reaches its goals.

Trump has defended his move to withdraw troops from Syria as part of a wider effort to bring U.S. soldiers home from "endless wars", despite being excoriated by members of his own Republican Party. Trump's decision to withhold protection from Syrian Kurds upended five years of U.S. policy.

It has also created a land-rush between Turkey and Russia - now the undisputed foreign powers in the area - to partition the Kurdish areas that were formerly under U.S protection.