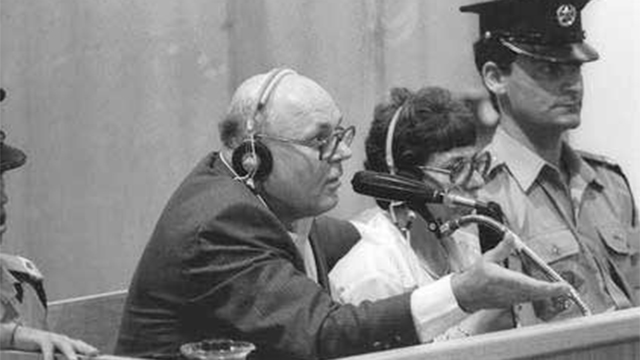 After success of other Israel-centric shows, 'The Devil Next Door', directed by two Israelis, focuses on the life of the infamous concentration camp guard known as Ivan the Terrible and will be available in November

The mini-series tells the real-life story of John Demjanjuk, an allegedly Ukrainian-born American pensioner living peacefully with his family in a Cleveland suburb.

John Demjanjuk during his 1987 trial in Israel (Photos: GPO)

His life changes after 11 Holocaust survivors identified him as Ivan the Terrible, a Nazi guard at several concentation camps who tortured and killed Jews during World War Two.

While standing trial in Israel in 1987, Demjanjuk was charged with crimes against humanity for his alleged complicity in the murder of thousands of Jews during the Holocaust.

Though found guilty and sentenced to death, he was eventually acquitted for lack of evidence by the Supreme Court in Jerusalem in a controversial 1993 decision.

In 2009, Demjanjuk was extradited from the U.S. to Germany, after a Munich court filled an arrest warrant against him.

In 2011, Demjanjuk was sentenced to five years in prison in Germany for assisting in the killing of tens of thousands of Jews in the Flossenbürg concentration camp and the Sobibor death Camp, in both of which he served as a camp guard.

Demjanjuk passed away in 2012, at the age of 91, in a German retirement facility near the prison where he resided.

The five-part mini-series will be available on Netflix starting in November.