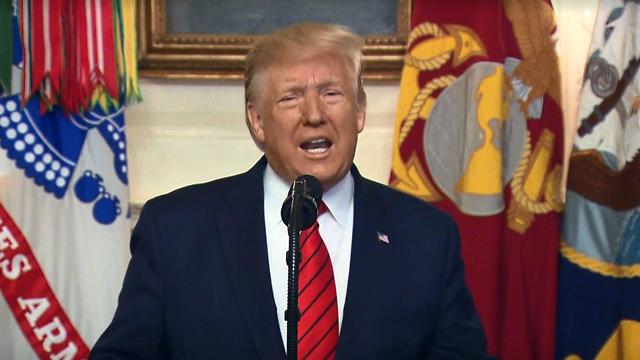 In special statement from White House, president says Abu Bakr al-Baghdadi killed himself and three of his children when he set off his explosives vest; U.S. troops removed sensitive information from compound in Idlib

U.S. President Donald Trump confirmed Sunday that Abu Bakr al-Baghdadi is dead after a U.S. military operation in Syria targeted the Islamic State group leader. Trump said in a statement to the nation from the White House's Diplomatic Room that "al-Baghdadi is dead" -- fulfilling the top national security priority of his administration.

He said Baghdadi "died like a dog" and "like a coward," when he detonated an explosives vest he was wearing, killing three of his children as well. A large number of Baaghdadi's companions were also killed in the operation, he said.

No U.S. personnel were lost in the mission, the president said.

He said that the U.S. forces were in the compound in Idlib Province in northwestern Syria for about two hours and removed sensitive information from the site.

Trump thanked Russia, Syria, Turkey and Iraq for their support in the operation. Iraqi and Turkish officials said earlier Sunday that their respective countries had played a role in the operation.

Under Iraqi-born Baghdadi's rule, Islamic State -- which at one point controlled swathes of Syria and Iraq - has been responsible for gruesome attacks against religious minorities and attacks on five continents in the name of a form of ultra-fanatical Islam.

He presided over IS's global jihad and became arguably the world's most wanted man.

The announcement came after Trump had been on the receiving end of bipartisan criticism in Washington following the recent pullback of U.S. troops from northeastern Syria, essentially abandoning the Kurdish fighters who had partnered with the U.S. to battle islamic State.

Critics feared that move would allow the militant group to regain strength after it had lost vast stretches of territory it had once controlled.