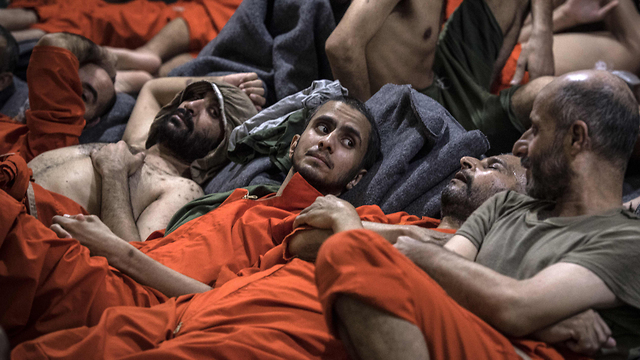 Bursting at the seams: Inside an IS prison in Syria

An exclusive peak into the facility where the Kurds are holding thousands of dangerous Jihadists reveals prisoners from all around the world sleeping on the floor, some severely ill; 'I want to go home, wish I hadn't answered the call to arms,' says one prisoner

Behind the steel door, the cell is as packed as their eyes are empty - haggard, scrawny prisoners in orange jumpsuits lying head-to-toe, cover every inch of floor space.

An AFP team was given rare access to one of the crowded detention facilities in northeastern Syria, where Kurdish forces are holding Islamic State group (IS) suspects.

As a Turkish offensive launched against Kurdish forces earlier this month wreaks chaos in the area, just how solid such doors will be is a question keeping the world on edge.

With 5,000 inmates - Syrian, Iraqi, but also British, French, German - the prison is bursting with the flotsam of the international jihadist army IS raised five years ago.

The group is accused of carrying out widespread atrocities in territory it once controlled across Iraq and Syria, including mass executions, rape, enslavement and torture, much of it filmed for propaganda.

Some of the detainees are teenagers, none of them have seen the the sun in months (Photos: AFP)

Some of the detainees are teenagers, and none of them have been under the sun even once in months or more.

Their grey foam mattresses overlap to carpet the cold floor, with only one corner of the cell taken by a basic, half walled-off pit latrine.

The stench is overwhelming in the nearby medical ward, where visitors are given surgical masks at the door.

They have virtually no knowledge of what is happening outside, their days measured only by the absent-minded thumbing of beads and the five daily Muslim prayers.

‘They have absolutely no contact with the outside world,’ says the prison chief (Photos: AFP)

The prisoners have not heard that on Sunday, U.S. President Donald Trump announced the death of IS leader Abu Bakr al-Baghdadi in a

"They have absolutely no contact with the outside world," says the prison governor, who gave his name as Serhat and asked that the exact location of the facility be withheld.

Many of the prisoners there are all skin and bones. The most fortunate have a bed to lie on, but most of them just sit directly on the floor, exposing amputation stumps and bandaged wounds.

The prison clinic is as crowded as the other cells. A greying man with axillary crutches painstakingly picks his way through the ghostly crowd.

Many of the prisoners there are severely emaciated (Photos: AFP)

The condition of the wounded speaks of the intensity of the fighting that led to IS's final territorial defeat at the hands of the Kurdish-led fighters of the US-backed Syrian Democratic Forces (SDF) in March.

It also reveals the dire conditions experienced by the final denizens of the jihadist "caliphate" when it made its last stand in Baghouz district, 200 kilometers to the south.

Most of the men who have been crammed into this Hasakeh province detention center and at least six others across Kurdish-held territory, are those who were seen limping to surrender just months ago, starved and mutilated.

‘I want to leave the prison and go back home to my family,’ says one prisoner (Photos: AFP)

"I want to leave the prison and go back home to my family," says Aseel Mathan, 22.

The lanky young man left his native Wales when he was still 17, to join his brother in Mosul, the northern Iraqi city where the IS "caliphate" was born.

When his brother was killed, he moved across the Syrian border to Raqa, the other main hub of the now-defunct jihadist proto-state.

"I want to go back to Britain," Mathan said, adding he wished he hadn't answered the call to arms issued in 2014 by al-Baghdadi.

The Kurdish authorities say more than 50 nationalities are represented in the Kurdish-run prisons where more than 12,000 IS suspects are now held.

Close to a third of the prison's population is sick and needs treatment (Photos: AFP)

Not all IS fighters were caught by Kurdish and US-led coalition forces in the dying days of the "caliphate" and the jihadist group has continued to attack its enemies through clandestine cells roaming the region.

"Some days", governor Serhat says, "fugitive jihadists come near the prison and open fire, just as a way of telling the detainees that they are still there."

From France to Tunisia, many of the IS prisoners' countries of origins have been reluctant to repatriate them, fearing a public backlash at home.

With support from their main US ally more unpredictable than ever, and under constant pressure from their archfoe Turkey, the Syrian Kurds' autonomous administration can barely protect itself, let alone foreign detainees.

Kurdish forces have repeatedly warned that a Turkish invasion - which became a reality on October 9 - could result in mass prison breaks that would release some of the world's most fanatic terrorists into the region, and beyond.

According to a senior US official, more than 100 have already broken out.

None from this prison, Serhat says, although some inmates started a riot during a meal distribution a month ago, attacking guards after one prisoner drew them in by faking a health issue.

Fugitive jihadists come near the prison and open fire, just as a way of telling the detainees that they are still there (Photos: AFP)

Guiding AFP journalists through the corridors of the prison, one guard is hesitant to even lift the hatch in the cell door.

"These ones are dangerous", he says.

Further down, one cell is reserved for what IS propaganda used to call "the cubs of the caliphate", children who were enlisted and trained as fighters

One nine-year-old boy from central Asia named Khaled pops his head out of the hatch to see who the visitor might be, smiling to the guard who asks him to calm down his boisterous cellmates.

Some children have been repatriated but the fate of the men remains unclear.

Close to a third of the prison's population is sick and needs treatment for a variety of wounds and conditions that include hepatitis and AIDS.

Only around 300 of them can spend the night in the medical ward, among them Aballah Nooman, a 24-year-old Belgian who lifts his T-shirt to show an open wound.

"My organs are spilling out," he says, explaining that he sustained the wound from a fellow jihadist who accidentally shot him while cleaning his weapon.

Bassem Abdel Azim, a 42-year-old Dutch-Egyptian, was wounded in an air strike and can't use his right leg.

He recounts how he tricked his wife into travelling to the "caliphate" with the promise of a holiday in Turkey.

"I didn't tell her, I didn't want her to be scared," Abdel Azim says, explaining he has no idea where she and their five children are now.

"I would like to see her again. They can hang me after that, I just want to tell her I'm sorry I took them in a country at war."