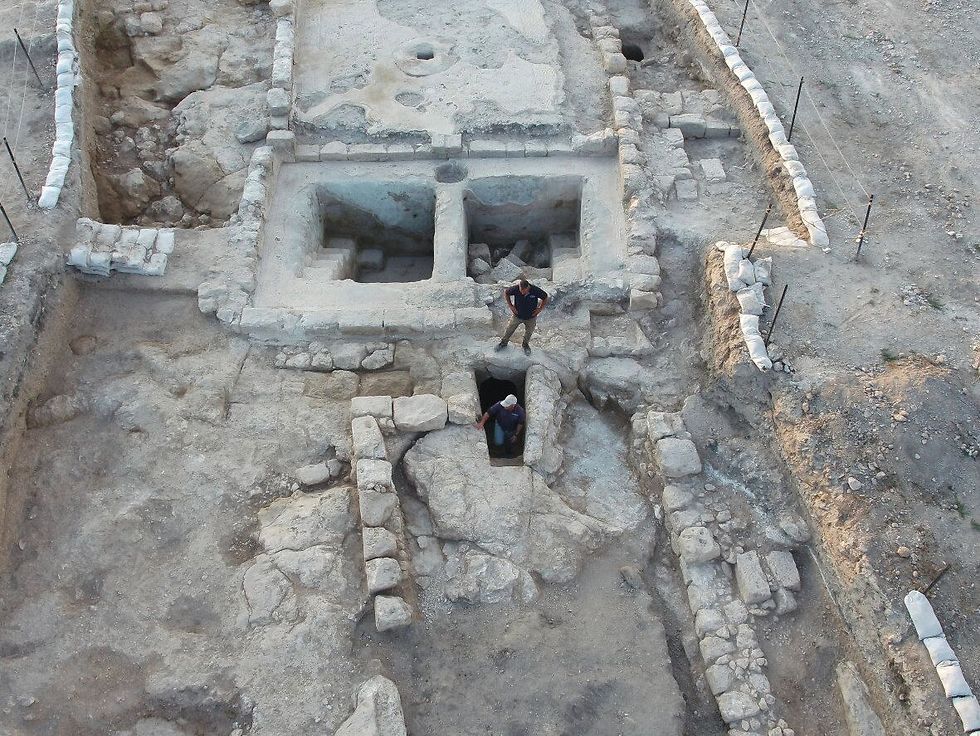 The find of iron slag lying adjacent to the tools reveals new data on the ancient site: The inhabitants of Usha manufactured iron tools

A 1,400-year old hammer and nails were found by a family digging at the Israel Antiquities Authority (IAA) excavation at ancient Usha, near Kiryat Ata.

About 8,500 people participated over the Sukkot holidays in the IAA archaeological excavations and activities, but nobody expected to discover the items most closely associated with building the Sukkah – the hammer and the nails – from the Byzantine period, about 1400 years ago.

Such was the luck of a family from Tur’an in Lower Galilee, who took part in the dig at Usha.

According to Yair Amitzur and Eyad Bisharat, directors of the excavation on behalf of the IAA, “About 20 iron hammers are registered in the Israel Antiquities Authority records, only six of them from the Byzantine period".

"We already knew that the Usha settlers extensively manufactured glass vessels, since we found many wine glasses and glass lamps together with glass lumps that were the raw material; the discovery of the hammer, the nails and the adjacent iron slag teaches us that they also produced iron tools at the site”.

Some of the 15,000 pupils who participated in the archaeological excavations at Usha over the past year (Photo: Israel Anitiquity Authority)

Alongside these industries, complex pressing installations for the production of olive oil and wine indicate that the primary occupation and source of income of the Usha inhabitants was the large-scale processing of the agricultural produce of the olive trees and the vines that they cultivated on the surrounding gentle hillslopes.

Adjacent to the oil and winepresses were exposed two rock-hewn ritual baths with plastered walls and steps, dating to the Roman and Byzantine periods, about 1800 years ago.

The 1,400-year-old iron hammer and nails that were found at Usha (Photo: Israel Anitiquity Authority)

The main ‘workforce’ excavating the site are school children, youth and volunteers, who participate in the excavations thanks to the Israel IAA's policy of bringing the community closer to its own cultural heritage.

Over the past year, more than 15,000 youth and families have taken part in the educational venture at Usha, digging and exposing the fascinating past of the site.

Amitzur also said that the town of Usha had been mentioned in Jewish sources since the first century CE.

"The settlement of Usha is mentioned in the Jewish sources many times in the Roman and Byzantine periods, as the village where the institution of the Sanhedrin was renewed, after the destruction of the Temple in Jerusalem, and after the failure of the Bar Kochba Revolt in 135 CE".

"The Sanhedrin was the central Jewish Council and Law Court, and it was headed by the President, Rabban Shimon ben Gamliel the Second, who both presided in Usha, and then his son Rabbi Yehudah Hanasi".

"Here in Usha the Rabbis of the Sanhedrin made decrees to enable the Jewish people to recover after the war against the Romans, and to reconstruct Jewish life in the Galilee".

"The Jewish sources mention that Rabbi Yitzhak Nafha was an inhabitant of Usha, and his name ‘Nafha’, meaning ‘the blower’ indicates that he probably worked as a glass manufacturer".

"The many delicate wine glasses, glass lamps and glass lumps indicate that Usha inhabitants were proficient in the art of glassblowing. The ritual baths adjacent to the presses indicate that the Sanhedrin Sages paid particular attention to issues of ritual purity".

The excavations at Usha are part of the Sanhedrin Trail Project that was initiated by the IAA, crossing the Galilee from Bet Shearim to Tiberias, following the movement of the Sanhedrin sages who finally convened in Tiberias.

The excavation is underway, continuing throughout the year with the participation of thousands of school children, youth and volunteers.