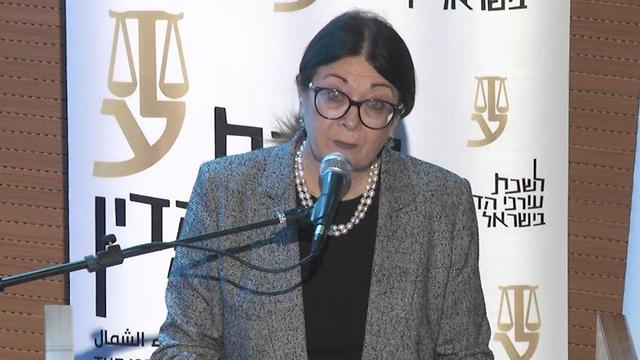 Responding to Justice Minister Amir Ohana's attack on the attorney general and the prosecution Tuesday, Hayut says 'We are all committed to stand firm and carry out our duties without fear of retribution'

Chief Justice Esther Hayut warned of politicizing the judicial system calling on those within it and those tasked with protecting it, to act responsibly.

One day after the unbridled attack by Justice Minister Amir Ohana on State Attorney Avichai Mandelblitt's office and the prosecution.

Supreme Court Chief Justice Esther Hayut responded to the ministers' harsh words by saying that never in Israel's democratic history has there been such an assault on the judicial system.

Without mentioning the minister by name, Hayut said "We are all committed to stand firm and carry out our duties without fear of retribution as those responsible for the rule of law and its protection".

Speaking in northern Israel, the chief justice said political influence in the legal system can undermine the independence of the judiciary and destroy public trust in it"

Hayut warned representatives of theIsrael Bar Association that attorneys may also be victimized.

"I have said in the past the importance of keeping the Bar free from political influence and when I say we must all stand strong I mean not only the courts but the Bar Association as well."

She went on to say that there should be no one immune to criticism and we can always try to do better but "we must also be aware that in the guise of legitimate criticism there might also be an attempt to de-legitimize the institutions needed to uphold our democracy and legal system".

Yesterday, minister Ohana lashed out at the prosecution and the Attorney General who are considering indictment of Prime Minister Benjamin Netanyahu on three counts of corruption.

Attorney General Mandelblitt said he regrets the ministers words but added "We will not be deterred from carrying out our duties faithfully."