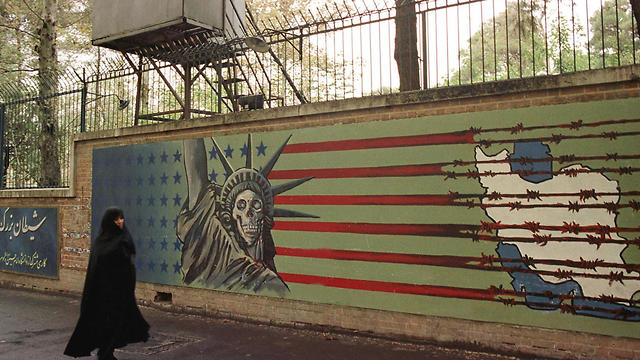 40 years on, U.S. Embassy in Tehran is monument to Iran hostage crisis

A brick gate around the compound is today famous for its anti-American murals and entering the facility is like stepping back in time, with a museum in what was once the vault displaying communications gear destroyed by besieged staffers

TEHRAN -- The U.S. Embassy in Tehran remains frozen in 1979 as the 40th anniversary of the Iran hostage crisis approaches, a time capsule of revolutionary graffiti, Underwood typewriters and rotary telephones.

The diplomatic compound was overrun by students angered when Washington allowed ousted Shah Mohammad Reza Pahlavi into the U.S. for medical treatment. What initially began as a sit-in devolved into 444 days of captivity for 52 Americans seized in the embassy.

An Iranian woman walks past an anti-U.S. mural at the former American embassy in Tehran, Nov. 3, 1999
Today, the embassy remains held by the Basij, a volunteer wing of Iran's paramilitary Revolutionary Guard, partly as a museum and a space for student groups. Likewise, the Iranian Embassy in Washington remains empty since then-president Jimmy Carter expelled all of Iran's diplomats during the crisis, although it is closed to the public and maintained by the U.S. State Department. The 27-acre U.S. compound sits on the corner of Taleghani Street and Mofatteh Avenue, a busy thoroughfare through downtown Tehran. Before the 1979 Islamic Revolution, Taleghani Street was known as Takhteh-Jamshid Street, the Farsi term for Persepolis, the ancient Persian religious capital. Mofatteh Avenue had been named after U.S. President Franklin D. Roosevelt, whose distant cousin Kermit Roosevelt, a CIA operative, played a role in the 1953 coup that toppled Prime Minister Mohammad Mossadegh and cemented the shah's power. The brick gate around the compound has become famous for its anti-American murals. On the day of the takeover, Nov. 4, 1979, Islamic students scaled its fence the same way their Marxist rivals had done earlier that year on Feb. 14. The earlier incident was broken up by security forces, and an uneasy calm had returned to the embassy, although officials cut its staff to about 70 people. The Great Seal of the United States on the outside wall has been defaced, although another one still is undamaged in white above the entryway of the compound's chancery. The two-story office block resembles a U.S. high school, something the diplomatic staff joked about by calling it "Henderson High," after former U.S. Ambassador Loy Henderson.

Entering the chancery is like stepping back in time. Rooms on the ground floors were shut and locked when Associated Press journalists visited on a recent night. The rooms are used by student groups and others.

Up a staircase, a guide led the AP journalists through the heavy safe door that guarded the embassy's secure vault room. This area has become part of the Basij museum. Inside the vault sits the embassy's communications gear. Those Americans who hid in the room during the takeover rendered the equipment inoperable, removing and destroying individual components of the telexes -- teletype machines that could transmit messages over phone lines to the rest of the world.

By destroying only the components, the staff could easily put the machines back into use had Iranian security forces rescued the employees, as they had in the Feb. 14 incident.

"The list was prioritized, so that the last items to go were the secure teletypes that kept them connected to Washington," journalist Mark Bowden wrote in his 2006 book, "Guests of the Ayatollah," recounting the crisis. "When it was decided to begin destroying them, selected parts were culled from the various bits and either smashed with a hammer or cut in half with a saw." But saving the bulk of the machines instead only made them curiosity pieces in the Basij museum. A small placard on part of the equipment simply identifies it as a "coding and electronic communication center." Against a wall near a window air conditioner sits a blue-gray metal contraption that looks like a small wood chipper. A hose runs from it to a vacuum-cleaner-like device sitting over a large barrel. This was the embassy's disintegrator, an industrial-style device designed to first shred documents and materials, then burn them to ash inside the barrel. "It was slow to work and temperamental in nature, subject to jamming at the least provocation," recounted William J. Daugherty, a CIA officer who was among the hostages. "Within a few minutes, the device went 'ka-chonk' and shut down. Using a small commercial paper shredder, we continued to destroy what we could."

But they left behind a huge pile of shredded strips that the students later would spend weeks piecing together like a vast jigsaw puzzle of memos and reports. Other papers didn't get shredded.

On one table sits a CIA report on Sheikh Isa bin Salman Al Khalifa, then the ruler of the Mideast island nation of Bahrain. Empty safes stand open, with one bearing signs of being pried apart.

Other rooms contain black-and-white photos of the embassy takeover. A large painting of one of the images shows U.S. Marine Sgt. Ladell Maples of Earle, Arkansas, and Cpl. Steve Kirtley of Little Rock, Arkansas, with their hands above their heads at the time of the takeover. Images like those of surrendering American troops carry a strong resonance for hard-liners in Iran. Hanging on another wall is an artist's rendering of Iran's 2016 capture of 10 U.S. sailors in the Persian Gulf before their release a day later.

A worker uses a water jet cleaner to erase a mural painting on the wall of the former U.S. embassy in Tehran, Sept. 29, 2019
Some of the walls in the chancery bore fresh paint, although others still show some of the students' graffiti. "The den of espionage must be shut down," it reads in Farsi, while another line honors Ayatollah Ruhollah Khomeini, who became supreme leader of Iran after returning from exile in France earlier in 1979. In English, it reads: "There is no time for intervention in Iran anymore." One wall features a poster in Farsi reading, "Death to America," although it offers an alternative English translation of "Down with America." Another reads: "Death to the USA," with the letter "U'' bearing the profile of U.S. Secretary of State Mike Pompeo; the "S'' the pompadour of President Donald Trump; and the "A'' the moustache of former U.S. national security adviser John Bolton, a longtime hawk on Iran. "Death to America means 'Death to Trump, John Bolton and Pompeo,'" the sign's caption reads, quoting a February speech by Ayatollah Ali Khamenei, the current supreme leader, published by his website. "Death to these individuals means death to American leaders. We have nothing to do with the American people," it says. In the same speech, Khamenei added: "As long as the U.S. government and regime continues the same malevolence, interference, evil and malice in its actions, this 'Death to America' will continue to be heard from the people of Iran."