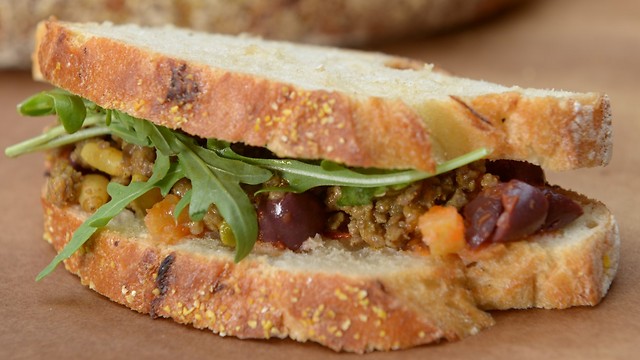 Fresh bread stuffed with all kinds of goodies; from Haifa to Eilat, in honor of International Sandwich Day, we've compiled a list of the best sandwiches you could find across the country

Sometimes its just two pieces of bread with something placed between the two slices, and sometimes it is a work of culinary art.

The sandwich is one of the most basic and simple foods there is. For some, it might be a quick fix-up, while for others it might be a full-course dinner. You can find some pretty sophisticated sandwiches and some simple ones that pack a lot of flavor. Either way, if it's done right, every bite could be intoxicating.

So simple, yet so good

In honor of International Sandwich Day this Sunday, we've compiled a list of some of the best and craziest sandwiches you can find across Israel.

Roasted baloney sandwich at "Abu Shukri's Butcher Shop" The veteran family butcher shop, found not far from Talpiot Market in the city of Haifa, is home to some amazing non-kosher sandwiches.

Packed in a buttery, roasted ciabatta with Italian prosciutto, French salami, white sirloin steak and bacon, with melted cheddar holding everything together.

To moist up this heavenly bite, coleslaw, veggies and condiments are added. The sandwich is priced at 45 shekels each.

"Chivito," also in Haifa, makes South American sandwiches that will make you go mad just by looking at them. The menu includes up to 15 different sandwiches.

But, the one that takes the cake must be the "Uruguayan" sub, which consists of entrecote, lamb bacon, schinken (ham), turkey, gouda, fried eggs, caramelized onions, roasted pepper, veggies and sauce. All of that packed into an extremely soft ciabatta and a side of fries, which you can get for 70 shekels.

If you are up for a challenge, try the "Alegria Samba", a rather expensive 110 shekels sub, but loaded with entrecote, smoked veal chorizo, lamb bacon, swiss cheese and if that's not enough, there's also roasted peppers, fried eggs, jalapeno, honey mustard, garlic and fresh veggies. Sha'ar Palmer 2, Haifa. 04-6220032, not kosher

The pub is considered a Haifa institution and holds a rather to-the-point menu, where you can find some good pub-feeds to go together with the drinks and suck up all the alcohol.

The meals don't feel pretentious like other food served in bars, and most importantly on the menu you can find one insanely huge and insanely constructed sandwich.

The famous Philly cheesesteak comes in an enormous crunchy ciabatta, loaded with warm thin slices of sirloin steak and gouda, fried onion, tomato and chipotle mayonnaise that gives it a spicy twist. This work of art will cost around 59 shekels.

Challah with Schnitzel at "Numan"

"Nurman", named after the inventor of the shawarma Kadir Nurman, opened its doors about a year ago.

They serve shawarma during the week in either a baguette, taboon bread or pitta.

On Fridays, they turn HaHashmonaim street in Tel Aviv into a mass gathering where the main attraction is a sweet challah sub.

Inside the sweet dough hide four schnitzels, together with roasted eggplants, soured lemon, fried spicy pepper, homemade matbucha with subtle hints of spicy and many other secrets.

The sandwich is served with Tunisian pickled veggies, sweet potato and regular potato fries and is priced at 39 shekels for a single or 150 shekels for five.

The kosher burger joint offers some good hamburgers and kosher American subs you must try.

The first is the "Ruben": two slices of rye bread with New-York style pastrami, spicy Korean kimchi and siracha truffle mayonnaise. All of this is put on an American grill and the result is both juicy and crispy.

There other specials, like the "Godfather" sub with spicy Italian sausage, onion, grilled peppers, fennel, mustard, and crispy fries, all stuffed in a ciabatta; and don't forget the "Cuban" sub with lamb ham, mozzarella, sweet dill pickles and mustard. Carlebach 14, Tel Aviv. kosher

Be'er Sheva has too many places to list here in detail, but a few champion sandwich joints that stand out are: "Pinat HaOchel" meat-fruit fusion sub, "Ori's Baguette" with its crispy schnitzels and the "Mad Cow" sandwich found in "Saba Jebeto".

In the less touristic area of Eilat, where the locals eat, hides a sub eating gem.

Omer's serves its sandwich in a white bread bun and one of the tastiest sandwiches, the "Bukharin".

The "Bomba" sub is served in this cool sub joint in the Mahane Yehuda market.

You can get it with either asado or corned beef, with Italian salami or Romanian pastrami.