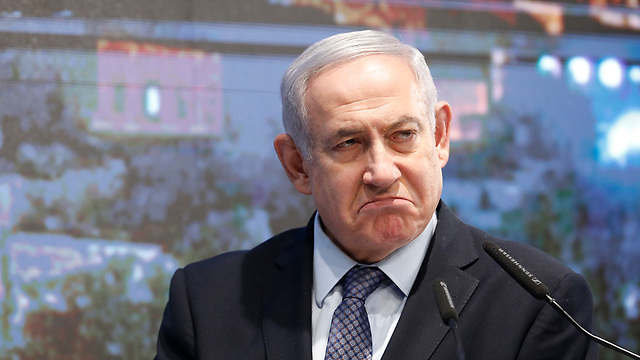 Netanyahu's campaign against the rule of law

Opinion: By accepting the arguments of the prime minister's legal team, Mandelblit may be handing Netanyahu a campaign, complete with the slogan that without bribery, there is no case against the prime minister

In the year 2000, Israel Police issued a recommendation that Prime Minister Benjamin Netanyahu and his wife should be indicted for attempting the use of public funds to pay for private services they had received.

The incident in question took place in 1996, during Netanyahu's first election campaign and continued after he became prime minister.

He did, however, release a report criticizing the behavior of both Netanyahus, in which he said: "Even if the couples' behavior was not criminally litigated; it was an ugly act."

None of this interfered in Netanyahu's ability to be elected again and again and again. Public condemnation - even when made by officials in law enforcement - has only bolstered him.

There are similarities between Rubinstein and current Attorney General Avichai Mandelblitt.

Both are observant Jews who served as cabinet secretaries, a post that versed them in the pressures a prime minister and his government are often under. That may have swayed their positions on the high standards needed for prosecution.

But the two differ as well. Rubinstein refused to prosecute Netanyahu and Mandelblit chose to indict him on three counts, subject to hearings. He did however, refrain from adding bribery to two of the cases despite police recommendations to do so.

The major legal battle Netanyahu's attorneys waged at the pre-indictment hearing was to convince Mandelblit to also drop the bribery charges from Case 4000, in which alleges the prime minister is accused of easing regulations to the benefit of telecommunications mogul and then-Bezeq chief Shaul Elovitch in return for positive coverage on his Walla! news website.

If bribery charges are dropped, Netanyahu and his advisors believe, public perception will be that none of the remaining charges - fraud and breach of trust - would warrant the removal of a prime minister.

Though fraud and breach of trust are still considered serious crimes and carry a prison sentence, Netanyahu's perspective would concentrate on how his legal standing could be sold to voters.

In both 2019 election campaigns, Netanyahu lamented publicly that the police and prosecution were setting him up with bogus charges in order to oust him from office.

His base certainly received that message, with Likud winning over 30 seats in both elections.

The attorney general's decision to indict only helped Netanyahu's standing in the eyes of his voters who rallied to protect their leader from the "leftist elites" out to get him.

If Mandelblit decides to drop the bribery charge from Case 4000, what then would that mean for Netanyahu's reelection chances?

It would likely be the wind at his back that would propel him towards a third election in less than one year.

Netanyahu would regard the remaining charges as no worse than Rubinstein's public report back in the year 2000.

Should that be the outcome of the pre-indictment hearing, Mandelblit would be handing Netanyahu a ready campaign, complete with the slogan that without bribery there is no case against him.

Netanyahu's conspiracy theory about the way he has been "targeted" would also find validation in the eyes of his supporters.

When then and current Interior Minister Aryeh Deri was found guilty of accepting bribes and sentenced to prison in 1999, his party mustered a record-breaking 17 seats that were seen as the voters' condemnation of the judicial system.

Netanyahu will try to repeat that successful ploy, allowing a right-wing, religious government to be formed, ensuring he could pass legislation to prevent any future prosecution of his crimes while stripping the Supreme Court of much of its power.

The attorney general must consider legal and not political calculations, but dropping the bribery charges from Case 4000 would require Mandelblit to explain to the public how the police, prosecution and he himself – after years of deliberations – got things so wrong.

A free pass on bribery charges would allow Netanyahu to cause critical damage to the rule of law.

The prime minister's aides targeting state witness Shlomo Filber, now the subject of a police investigation, could be seen as a prelude to the next campaign, compounded by Justice Minister Amir Ohana and Public Security Minister Gilad Erdan's attacks on the police and prosecution, as well as the demonstrations held by Likud activists outside Mandelblit's home.

All approved by Netanyahu, Likud members are all set to bring down Israel's rule of law.