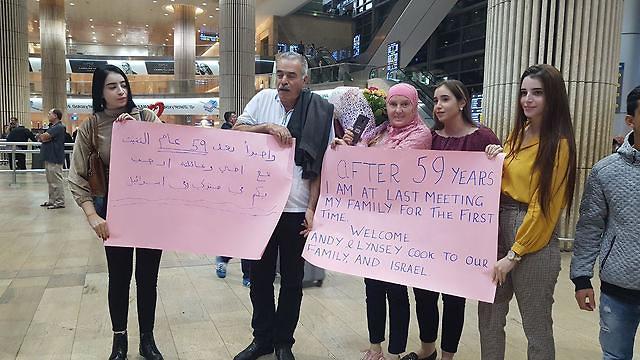 Brother and sister reunite in Israel after 59 years

They grew up apart in England and had never met before, but now thanks to a Facebook post, Susan Masrua from Tayibe and her long lost-brother have finally reconnected after decades of searching for one other

Fifty-nine years after she was separated from her family at birth, Susan Masrua from the central Israeli town of Tayibe got to meet her younger brother, Andy Cook, for the first time on Monday.

Like the rest of her siblings, 60-year-old Susan was born in England, sent to boarding school early in life and was later raised by a foster family until she was 18.

The reunion of Susan Masrua and her little brother, Andy Cook
X

The reunion of Susan Masrua and her little brother, Andy Cook

In the 1980s, Susan came to Israel, where she found a job as a nanny and met her future husband, Abed Masrua. She then decided to settle in Tayibe, while the rest of her siblings, one brother and two sisters, established their lives in England.

"I tried looking for them for so many years," said Susan, "it was very hard being so far away from all of them."

Meeting for the for time after 59 years

A few months ago, Susan decided to try and contact her siblings through Facebook. She found the page of the boarding school she attended and a post from one of her previous friends.

"My son told me to try to contact her, said I had nothing to lose," says Susan. But the woman had no recollection of her, even though she provided a picture of herself from her time at the boarding school.

"She told me she'd check with her husband who grew up with us in the boarding school," says Susan, "When he saw my picture, he immediately recognized me, and told his wife he knows my siblings had been looking for me for years."

The couple connected Susan and Andy, 58, who had a hard time believing this was really his long-lost sister.

"He kept asking me questions, and when he saw I had answers to everything he asked, he burst into tears," says Susan with emotion.

"Andy also connected me to our other two sisters, and I'm set to meet them soon,"

When Susan and Andy finally met at the Ben-Gurion Airport, which Susan says was like a holiday for her.

"I never thought I'd get to meet my brother, I'm so excited, it's hard to put it into words, all I want now is to spend my remaining years with my siblings."

"For years we looked for Susan," says Andy. " I asked about her all my life, and even though we've never met, she's been in my heart all these years."

"I helped my wife look for her siblings all these years, this is a day I will never forget," he says.

"She always talked about her them and how much she missed them, I'm so thankful she finally found them."