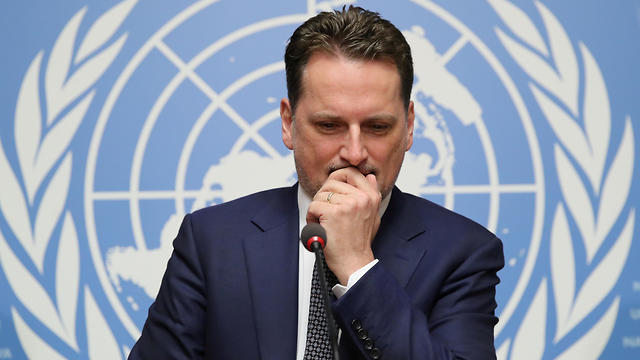 The allegations include senior management engaging in "sexual misconduct, nepotism, retaliation, discrimination and other abuses of authority, for personal gain, to suppress legitimate dissent, and to otherwise achieve their personal objectives

The report paints a picture of a small number of mostly foreign senior leaders centralizing power and influence while disregarding UN checks and balances.

Krahenbuhl himself is alleged to have been romantically involved with a colleague who was appointed in 2015 to a newly created role of senior advisor to the commissioner-general after an "extreme fast-track" process, the report says.

Pierre Krahenbuhl Commissioner-General of the UNRWA

This enabled her to join him on business class flights across the globe, the report claims.

In 2018 the United States suspended and later cut all funding for UNRWA, causing a financial crisis that threatened to see its schools and hospitals closed.

An internal ethics report has alleged mismanagement and abuses of authority at the highest levels of the UN agency for Palestinian refugees even as the organization faced an unprecedented crisis after US funding cuts.

The allegations included in the confidential report by the agency's ethics department are now being scrutinized by UN investigators.

The United Nations Relief and Works Agency (UNRWA) said it is cooperating fully with the investigation and that it cannot comment in detail because the probe is ongoing.

AFP has obtained a copy of the report which describes "credible and corroborated" allegations of serious ethical abuses, including involving UNRWA's top official, Commissioner-General Pierre Krahenbuhl.

It says the allegations include senior management engaging in "sexual misconduct, nepotism, retaliation, discrimination and other abuses of authority, for personal gain, to suppress legitimate dissent, and to otherwise achieve their personal objectives."

One senior official named in the report has left the organization due to "inappropriate behavior" linked to the investigation, UNRWA said, while another has resigned for what the agency called "personal reasons."

UNRWA said in response to AFP questions that it "is probably among the most scrutinized UN agencies in view of the nature of the conflict and complex and politicized environment it is working in."

"Over the past 18 months, UNRWA has faced immense financial and political pressure, but its entire staff body has steered it, serving 5.4 million Palestine refugees through the most unprecedented financial crisis in its near 70 years of history," it said.

Palestinian kids in a refugee camp in the Gaza Strip

The report was sent to the United Nations secretary general in December and UN investigators have since visited UNRWA's offices in Jerusalem and Amman, collecting information related to the allegations, sources familiar with the matter said.

Krahenbuhl said in a statement to AFP that "if the current investigation... were to present findings that require corrective measures or other management actions, we will not hesitate to take them."

UNRWA was set up in the years after more than 700,000 Palestinians were expelled or fled their lands during the 1948 war surrounding the creation of Israel.

It provides vital schooling and medical services to millions of impoverished refugees in Lebanon, Jordan, Syria and the Palestinian territories.

It employs around 30,000 people, mostly Palestinians, and its UN mandate is set to be debated later this year.

UNRWA school at Beit Hanoun in the Gaza Strip

US President Donald Trump's administration, along with Israel, accuses UNRWA of perpetuating the Israeli-Palestinian conflict.

The agency disputes that and says the services it provides would otherwise not be available to Palestinians.

After the crisis began, Krahenbuhl established a fund-raising unit outside of the traditional mechanisms but it "reportedly raised only modest amounts," the report says.

At the same time, it enabled him to continue travelling with his partner, it says.

In another matter mentioned in the report, a Krahenbuhl deputy is accused of manipulating the system to find a well-paid job for her husband during the 2018 financial crisis.

Her management style is alleged to have included bullying, cutting those she disliked out of decision-making and avoiding checks and balances, it says.

The deputy left UNRWA last Thursday for what the agency said was "personal reasons". She could not be reached for comment.

Another senior official is described in the report as bullying staff and acting like a "gangster" and a "thug".

UNRWA said the official was recently "separated from the agency as a result of inappropriate behavior" linked to the investigation.

A senior UNRWA staffer was fired in early July after what she said was several years of trying to raise ethical concerns.

UNRWA said she was "separated" following a different investigation unrelated to the internal report, calling it a "stand-alone case of misconduct".

She claimed her firing was a retaliation and is appealing.

Documents seen by AFP show multiple times she raised concerns over potential mismanagement, including employees allegedly being promoted beyond their qualifications and supposed nepotism.

She told AFP she met directly with Krahenbuhl, but nothing was done.

"Most of the time it felt like working for a private company not the United Nations where we are supposed to comply with strict rules and regulations", she said.