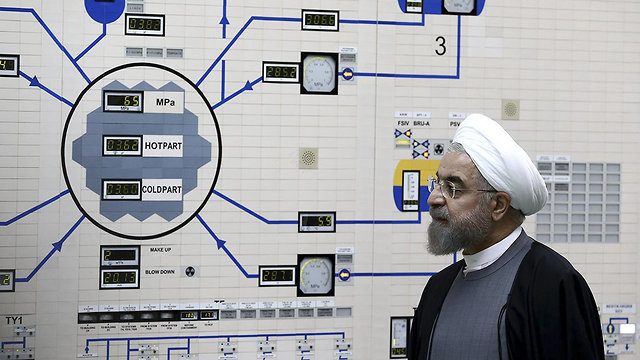 Opinion: The Islamic Republic has rebooted its efforts to obtain nuclear capabilities, but the government deadlock in Israel prevents the political echelons from making crucial decisions about these developments

The Israeli government is as if on a go-slow strike which doesn't allow any form of short- or long-term thinking, but the Middle East isn't waiting for anyone.

It demands decisions and actions and it demands them now.

The first issue, as the head of the Operations Directorate Maj. Gen. Aharon Haliva warned in a closed conference on Tuesday, is Iran's ability to fire missiles deep into the Israeli home front as retaliation for Israeli attacks against Iranian targets in the Middle East.

Iran already has the ability to fire rockets at specific sensitive locations within Israel. The only difference, according to the Defense Ministry, is that Iran is now willing to use this ability.

Israel is not Saudi Arabia, but Iran might confront Israel if the latter continues to constrict it steps in the region.

The second issue is Iran's announcement, that it had started operating state-of-the-art centrifuges that can enrich uranium ten times faster than the old ones.

In other words, Iran announced it had cut the time it will take her to reach military nuclear ability.

If on the eve of the signing of the nuclear deal's, Iran was less than a year away from obtaining a nuclear bomb, now, if willing, it will be able to get it in a shorter time period.

How much shorter? I doubt anyone can estimate exactly, but it's clear that the Iranian ability to enrich 25 kilograms to a 90 percent level - the point of no return - is only a matter of months.

Needless to say this is alarming news for Israel. The situation requires government decisions, political activity and allocation of recources for security, which means budgetary decisions.

All of this must not be done next year or when the next government will finally be established, It must be done right now, so that if Iran goes through with it's threats, Israel will be better prepared than it is today.

The Iranians keep on crossing more red lines all the time, repeatedly testing the boundaries of the American determination and the European passiveness.

The timing of Iran's announcement, that it is operating new centrifuges, is like sticking a finger in the Americans' eye, because it was made on the 40th anniversary of the takeover of the U.S. Embassy in Tehran.

Iranians celebrating the 40th anniversary of the takeover of the U.S. Embassy in Tehran (Photo: AFP)

This week, the ultimatum that Iran has set for Europe, demanding they bypass U.S. sanctions, has expired.

Tehran still hasn't completely ditched the nuclear deal. It gnaws small pieces of it at a time, small enough for Europe not to make drastic decisions.

If Prime Minister Benjamin Netanyahu is so worried about the Iranian front – it is incumbent upon him to come up with solutions rather than intimidations.

However, in the current political situation, much is being talked about but only a little is being done.