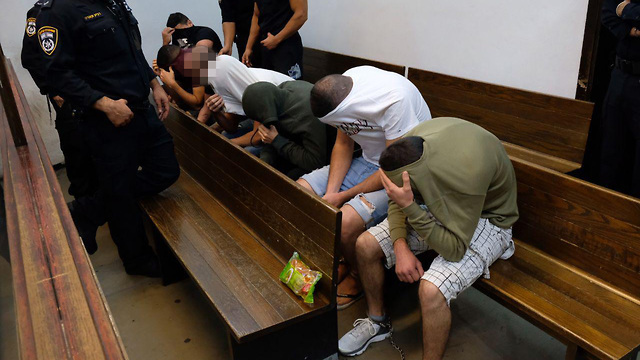 The suspects aged 17 to 30 are accused of distributing images in Telegram groups with thousands of members; one woman discovered video of her half-naked in clothing store changing room was shared online - 'I feel like a joke,' she says

Israel Police officers across the country on Wednesday raided the homes of 12 youths and young men suspected of distributing nude photos and videos of hundreds of women on secure groups in the Telegram massaging app.

Investigators tracked down the distributors of the content during a covert police investigation over the past few weeks.

The suspects in court in Tel Aviv (Photos: Shaul Golan)

The suspects, aged 17 to 30, appeared before Tel Aviv Magistrate's Court for a remand hearing Wednesday.

For the victims, the discovery that they had been preyed upon caused shock and anger.

Yana Gross a 23-year-old resident of Rishon Lezion, discovered that she had been filmed without clothes in a changing room of a store and that the footage was distributed among the thousands of members of a Telegram group.

"It angers me deeply and I feel like a joke," Gross told Ynet.

"People I know started sending me screenshots in which I can be seen shirtless while changing," she said

"They probably hacked the cameras at the store and downloaded the videos without the girls' knowledge. The owner of the store and I filed a complaint with the police."

Gross said it is important to send the message that women need to complain in order to stop this kind of violation from happening again.

"We cannot remain silent while being hurt like this," she said.

Nofar Kaminsky, 21, started getting phone calls from anonymous men about six months ago, and she realized that her phone number had been distributed in various groups.

"Men started calling me and sending me messages and I knew something was going on," she said.

"After looking into it – I realized that someone had written a message in one of the groups reading 'huge-breasted Instagram slut' and next to it my phone number," she said. "It led to many weird conversations from men.

"The worst part was that my then-boyfriend blamed me for publishing screenshots of guys who texted me, but I did it only to raise awareness for other girls,"  she said.

"He said they put my number there to get back at me. It's a comfort to know that the police have arrested them."

"It all started when I suddenly started receiving phone calls and messages on social media from guys I didn't know. At first, I had no idea what it had to do with me, but then a girl wrote to me on Instagram that there were naked photos of a woman with a link to my Instagram being shared across groups along with my phone number."

A spokesperson for Israel Police said: "The photos were shared in private groups with thousands of users. The police have begun a covert and through investigation, and will continue to try to protect the victims, adults and minors, online and elsewhere."