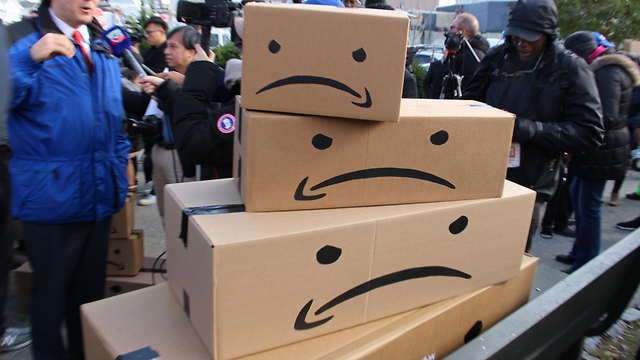 Two months on, most Israeli sellers feel cheated and dissatisfied after the e-commerce giant offered business counseling and advised them to ready their stocks for an influx of customers that never came

Israeli sellers invested up to hundreds of thousands of shekels starting a store on Amazon, but two months since the site's official launch in Israel, traffic is low, sales are few, and Amazon is failing in keeping its promises.

According to a senior official in a large manufacturing company that invested hundreds of thousand of shekels opening a storefront on the site, "Amazon doesn't care about us, ever since they opened the Israeli version of the site there's been no advertising, and no effort being put into bringing more traffic whatsoever, maybe we’re nothing more than guinea pigs."

Sellers in Israel are disappointed with Amazon (Photo: Shutterstock)
In a time when Israelis are flocking to local shopping website 'ShoppingIL', the lack of effort on Amazon's part is especially evident, and the Israeli stores on the e-commerce giant are a vast wasteland.

Two months after the initial launch of Amazon's so-called "local" version, the Israeli stores on Amazon are mostly lifeless, and the merchants are furious.

"Something isn’t working over there, there's almost no sales at all," says one mid-size seller. "There was a small buzz at the beginning, but for almost two weeks there has been nothing."

So, what was it that led to the aforementioned wasteland? According to the CEO of one of the largest companies to open a store on Amazon, the problem lays in the managing of expectations.

"Interested parties fed us fake news saying Amazon was officially launching in Israel, on Amazon's part it wasn't really a site launch, so there was no need for special attention," he says.

"As part of the local version's launch, Amazon flew its specialists from Berlin in order to lecture Israeli merchants about selling on the site," he said, "and here we interpreted it as part of the preparations for a full-scale launch, it's our expectations that were over the top, I do think Amazon will make a move into Israel though, and then, I'll be ready."

Illustrative image
In the meantime though, it's safe to say that Amazon did not really launch in Israel. The site isn't in Hebrew, there's no amazon warehouses, and there's not one mention of the holidays in which all shopping and deliveries are halted in Israel. Amazon algorithms even closed down Israeli stores because no deliveries were being made during the holidays and weekends, effectively breaching the five-day limit to make a delivery rule imposed by Amazon.

So, why stay in the barren, lifeless fields of Amazon?

According to another Israeli seller, it's the fear of losing the thousands of shekels already invested, coupled with a hope things might turn around.

"Right now it's a failure, but you're afraid that quitting Amazon will mean you'll lose customers later if and when Amazon decides to officially launch in Israel down the line."

And there are of course those who invested far more than a few dozen shekels.

"It's weird, we invested hundreds of thousands of shekels, they pressured us to be ready, to offer special sales and free shipping, and since we opened, they've done nothing to help us," one seller said.

"Malls take an active part in attracting customers, and when the mall's stores don't get enough customers, the mall's management sits with the retailers and they all think together what to do to better the situation. We contacted Amazon's representatives in Israel, but we got no answer, so we're considering writing a letter to Amazon's CEO."

Online shopping is popular among Israelis
According to the merchants, Amazon promised to direct customers to their stores on the site with a huge campaign, and in the meantime it's just not happening.

Avraham Shomer is the CEO of a popular Israeli bookstore who also opened a storefront on Amazon.

"There are a few sales, I believe it's a sort of an experiment on Amazon's part as well, I really don't know where it'll go from here, it's all up to them," Shomer said.

"It's not a success story, we tried with an expensive pilot, I don't have an explanation for why nothing's happening," he said.

But not all merchants are taking the slow traffic quite as hard.

The VP of marketing for electronics import company Newpan, Moran Dai: "We're not measuring our success on the Amazon platform by months, we’re thinking long term. We’ve only just started, and there are certain hurdles the consumer needs to go through on the site at the moment. In spite of of that, we decided to open a store on the site," she said.

She said there's cooperation between Newpan and Amazon, "that proves itself strategically."

According to Dai, a company like Newpan cannot afford not to be a part of Amazon's operations. "It's less about actually selling, it's more about actually being part of the site," she said.

Amazon did not respond to queries from the reporter.