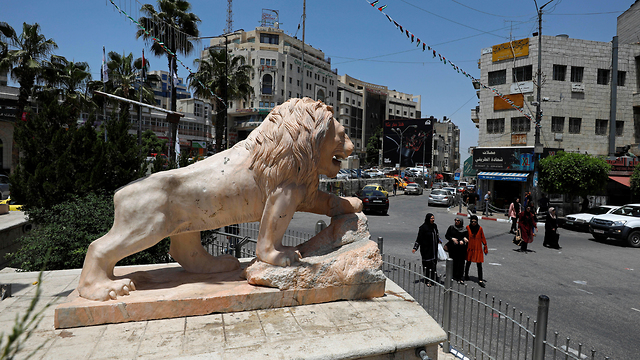 Who will lead the Palestinians after Abbas?

Opinion: Though no attempt has been made to push Abbas out of office, his age and ailing health require those vying for his job to consider their options as they wait for nature to take its course

The attention given to the Palestinian arena, minimal as it is in normal times, is even less today.

From Iraq to Lebanon, social and security issues make headlines, while in Israel – the political stalemate is all consuming.

Down Town Ramallah on the West Bank (Photo: Reuters)

But below the surface, actual shifts are afoot, which may affect the near future.

In other words: everyone is preparing for the day after Palestinian President Mahmoud Abbas is no longer in charge.

It appears as if nothing dramatic as happened. Abbas is not dying or even hospitalized, though rumors about his failing health pop up every few weeks.

He will be 84 in ten days, he has cancer, suffers from depression and smokes like a chimney.

He blamed his failure to quit cigarettes on the troubles President Donald Trump has caused him.

Though the "Deal of the Century" seems now to be off the table, the PA's financial troubles are only growing, and the Palestinian national movement is at one of the lowest points in its history.

Abbas's age and frail health has so far prevented a battle between potential successors.

People believe nature will take its course so attempts to push him out of office have not been made.

Because both Israeli and PA security forces have invested years-long efforts, Hamas is absent as a military force in the West Bank.

Hamas' leadership understands that their hopes of assuming control through military means will fail, so they intend to make use of the available democratic and procedural means such as parliamentary elections.

Winning those seems likely, and if successful, a Hamas member will assume the position of speaker, which will position the movement perfectly, to take over the presidential post when Abbas is no longer able to fill the role.

Hamas's electoral prospects are difficult to foresee. Results of the public opinion polls conducted in the PA should not be considered trustworthy.

The last elections were in 2006, and then Hamas won a large percentage of the vote.

But that was before they took control of the Gaza Strip and imposed on its population a life of extreme poverty and hunger.

Many in the West Bank are frustrated and critical of the current government. Still, it is doubtful they see the situation in Gaza as a better option.

A possible path to the future leadership of the PLO may come from Fatah (the Palestinian National Liberation Movement).

Two possible candidates who have been waiting in the wings are considered strong contenders:

One is Jibril Rajoub, who is currently in charge of sports for the PA and has made a name for himself through the national soccer team.

The other is Mohammad Dahlan, who has been banned from the West Bank by Abbas but is believed to have a strong following in the Gaza Strip, enjoyed financial support from the UAE and seems to have Egyptian President Sisi in his corner as well – something Abbas is less than thrilled about.

Whoever the successor will ultimately be, the animosity for Hamas, expressed by the current leader will disappear and the factions will certainly make the effort to mend fences.