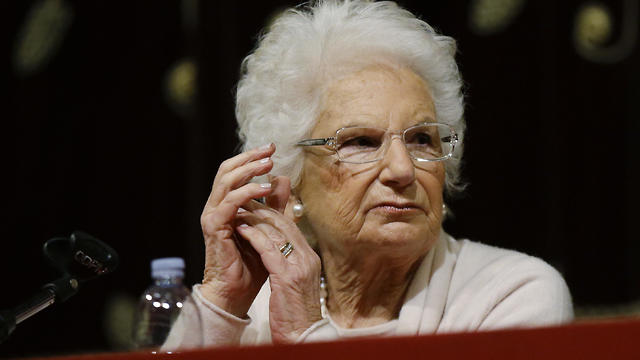 'What happened to you is another example of the reality the Jewish people face in Europe today,' writes president to former Auschwitz prisoner Liliana Segre, 89, who now has police protection after uptick in attacks as she battled anti-Semitism

President Reuven Rivlin on Sunday invited to Jerusalem a Jewish Italian politician and Holocaust survivor who has been the victim of anti-Semitism in her own country.

Rivlin wrote to Senator Liliana Segre, wjo survivied Asuchwitz, in a show of support for the 89-year-old, after she revealed that she faces hundreds of anti-Semitic attacks online every day and has even been assigned a police escort due to threats. .

Holocaust survivor Liliana Segre speaks with young students on the occasion of an Holocaust remembrance, at the Arcimboldi theatre in Milan, Italy (Photo: AP)

"I was appalled to hear that in order to ensure your safety, it was decided to assign you with regular security," Rivlin wrote. "Unfortunately, what happened to you is another example of the reality the Jewish people face in Europe today."

In response to revelations that she is subject to hundreds of social media attacks each day, Liliana Segre called for the creation of a parliamentary committee to combat hate, racism and anti-Semitism. Parliament approved her motion - but without votes from Italy's right-wing parties.

The vote, along with a round of racist chants in a soccer stadium, focused attention on what observers say is a growing boldness in anti-Semitic and racist attitudes in Italy, and the role of politicians in sanctioning them.

The rise in anti-Semitism has come alongside a climate of intolerance toward migrants arriving from Libya that found ferment during Salvini's tenure as interior minister, marked by a refusal to allow humanitarian rescue ships to land in Italy.

Segre was 13 when she was sent to Auschwitz, where her father and paternal grandparents were killed. She has spent the last several decades recounting her experiences during the Holocaust to young people.