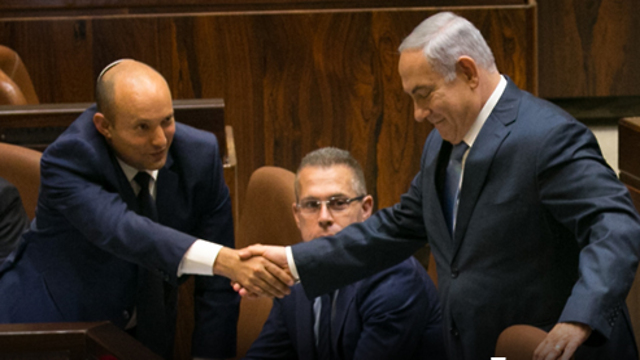 Opnion: For all Netanyahu's latest political maneuvering that appears to be intended to scupper a unity goverment, such a coalition remains Israel's best chance for stability as the nightmarish prospect of a third round of elections hangs over the country

While Blue and White leader Benny Gantz was apparently snoozing, his political rival Benjamin Netanyahu was busy at work.

By appointing New Right leader Naftali Bennett as defense minister, the prime minister averted the risk of his former adversary opting to join the opposing camp lead by Gantz.

Naftali Bennett and Benhamin Netanyahu in the Knesset on Sunday (photo: Ohad Zwigenberg)

Netanyahu once again showed his political prowess surpasses any other, for the appointment of Bennet to this coveted role is expected to be short-lived.

The prime minister did not commit to continuing the appointment should a unity government be formed - nor did the gesture extend to Bennett's political partners, pimarily former justice minister and joint New Right leader Ayelet Shaked, who was offered no ministerial position.

This latest maneuver is a union of Knesset factions, not of parties. Should the feared third election cycle in one year come to pass, Likud and the New Right will run separately, competing as they have in the past for many of the same votes.

Netanyahu is a politician of unrivalled sophistication, leaving his competitors in the dust. But Yisrael Beytenu leader Avigdor Liberman has also been busy, reminding the Israeli public in a television interview Saturday that the prime minister's latest move does nothing to facilitate the unity government he claims he is trying to help form.

Likud and New Right now make up the largest Knesset faction, surpassing Blue and White by three seats. But the 55-seat right-wing/religious bloc Netanyahu is leading has remained unchanged and is still short of a parliamentary majority.

Neither Netanyahu nor Gantz are able to form a government alone, but a third election cycle in less than a year would be damaging to both of their parties as well as to Liberman, some of whose eight seats came from liberal voters in September after he campaigned on promoting a unity government that excluded the religious parties.

The prime minister sees that a parliamentary election campaign is unpopular across the spectrum, and so his minions (not he himself, who maintains enough distance to claim plausible deniability) came up with the idea of an election for prime minister only. Netanyahu versus Gantz, with no need to dissolve parliament.

This is a nightmarish idea. Democracies do not change basic or constitutional laws before a government is even formed simply because a leader is unsatisfied with election results.

Liberman's initial response to the proposal was that he would not support it, which would make its passage in the Knesset even harder. But is it so impossible to see a scenario in which it does pass?

There are probably already those weaving tangled webs and putting deals together to ensure its passage in the current Knesset.

Netanyahu's efforts are clearly aimed at blocking any possibility of a unity government, so Liberman made clear to both leaders that he would pull his support from the candidate that foils the last chance to form one.

The price for Netanyahu is greater, however, as he would have to part with his right-wing/religious bloc if he were to hope for Liberman's support.

Another election campaign is bad for the country in every conceivable way, and a unity government must be established for the good of everyone.

I want to believe that it will come together at the very last moment.