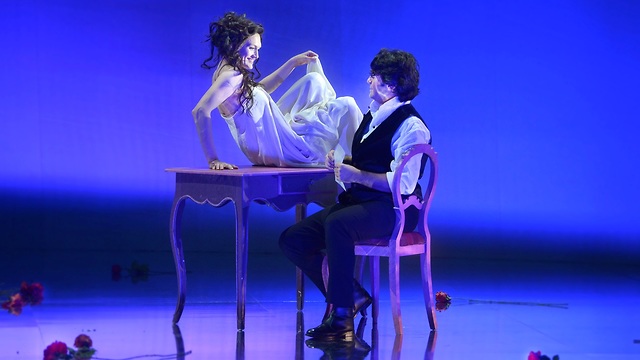 Review: The Israel Opera’s current production of Jules Massenet’s tragic opera is saved from deteriorating into sappy melodrama by the powerful and passionate performances of the artists in the two leading roles

For the second season in a row, the Israel Opera kicked off its 2019-20 season this month with performances of a dramatic opera by French Romantic composer Jules Massenet.

Last year, it was Werther, while this year it is Manon, a five-act opera that is being performed for the first time ever in Tel Aviv, as a co-production with the Lithuanian National Opera and the San Francisco Opera.

The two principals who carry this production are the Russian soprano Ekaterina Bakanova in the role of Manon, and the Italian tenor Leonardo Caimi in the role of her lover, Chevalier des Grieux.

(Note: Bakanova and Caimi sang at the premiere and are alternating in their roles during this run with two other artists: Romanian soprano Simona Mihai, who is making her Israel Opera debut, and Ho Yoon Chung, who acquitted himself very well as Werther in the opera of the same name last year.)

What Bakanova and Caimi bring to their roles are not only their magnificent voices but also talent as actors who clearly enjoyed chemistry when on stage together.

It also helped that both are attractive: the youthful Bakanova is believable as the naive waif who transforms into a greedy enchantress, while Caimi’s classic good looks serve him well as the seducer who eventually falls captive to Manon’s charms.

It is rare that there is such a gap between the principal and secondary roles, but in the case of this production, it is hard to recall any notable performances apart from the two leads.

A possible exception is that of Russian bass Vladimir Braun, a familiar voice to Israeli audiences, in the minor role of the Count des Grieux, one of his more than 50 roles with the Israel Opera.

This performance also marks the return to the podium of sabra Conductor Dan Ettinger, after an absence of close to a year.

Ettinger is the music director of the Israel Opera and its resident orchestra, the Israel Symphony Orchestra Rishon LeZion, as well as of the Stuttgart Philharmonic Orchestra, and he conducts regularly in leading opera houses around the world.

The orchestra was slightly more augmented than usual, with an expanded percussion section, and lovely interludes featuring wind instruments, especially the bassoons.

Finally, any review of this production would be remiss if it failed to mention the costumes, brilliantly designed by French costume designer Vincent Broussard, who is undertaking his first assignment for the Israel Opera.

One indication of how important the costume component is in this production is the fact that Broussard is also the director!

The stage design is very minimalist, so it is basically up to the costumes to supply the visual element of the opera.

Manon runs at the Israel Opera in Tel Aviv through November 18. The next production, in December, 2019, will be the American opera Dead Man Walking.