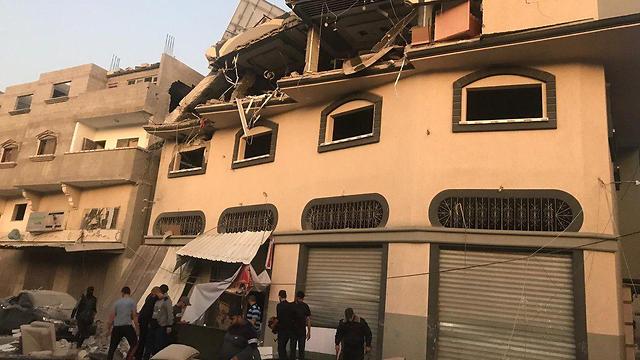 The IDF killed Islamic Jihad commander Bahaa Abu al-Atta in a Gaza airstrike in the early hours of Tuesday, in a resumption of targeted killing for the first time since 2014. The strike was followed hours later by rocket fire across southern and central Israel.

The Iranian-backed Palestinian group confirmed Tuesday morning that Abu al-Atta, its northern Gaza Strip commander had been killed and vowed to avenge his death.

The response was quick to come as dozens of rockets were fired from Gaza at southern and central Israel.

By 9am, the IDF said, 50 rockets had been fired from Gaza, of which the Iron Dome missile defense system intercepted approximately 20.

WATCH: Israel's Iron Dome in action as it intercepts rockets above central Israel.

Approx. 20 out of the 50 rockets fired by Islamic Jihad from #Gaza at Israeli civilians have been intercepted. pic.twitter.com/qy8uBMc4dL

Twenty-nine people were treated for light injuries in the rocket attacks.

One person was hurt in a direct hit on the Route 4 highway at Gan Yavne next to the southern city of Ashdod and a 35-year-old man was wounded in Moshav Be'er Tuvia in southern Israel.

Fifteen people were hurt as they ran for their bomb shelters and 13 people were treated for shock.

A house in the southern community of Netivot sustained a direct hit from a rocket.

A man is treated for shrapnel wounds after the rocket strike on Gan Yavne (Photo: AP)

All educational institutions were to remain closed Tuesday in the south and center of Israel, in line with instructions from the IDF Home Front Command. People in non-essential jobs were told to remain at home, but this was later amended to exclude anyone whose workplace has a bomb shelter.

This is the first incident of targeted killing by Israel since the end of the 2014 Gaza conflict, Operation Protective Edge.

Israelis crouch by the side of the road as sirens sound in Rishon Lezion (Photo: Hasifa)

Blue and White leader Benny Gantz said in a tweet Tuesday morning that he supported the decision to target Abu al-Atta and that Israel's security transcended politics.

"The battle against terrorism requires difficult decisions," the former IDF chief said. "Blue and White places every proper action taken for the safety of Israel above politics. Every terrorist who endangers our security knows he is marked for death."

The IDF released a statement confirming the attack was a coordinated effort by the military and the Shin Bet security service.

Gaza’s Health Ministry says a man and a woman were killed in the blast and two other people were wounded.

The airstrike damaged the half of the second and most of the third floors of a house in the Shejaeya neighborhood east of the city.