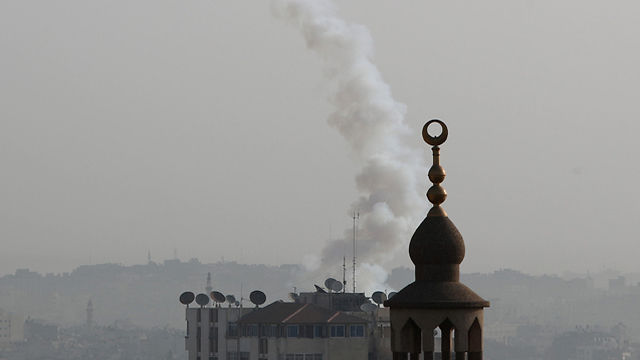 Israeli official: Gaza fighting could end tonight or it could escalate further

An Israeli senior official said on Wednesday that negotiation talks over a ceasefire in Gaza, which are conducted despite continued rocket strikes from Gaza militant groups on Israeli communities and IDF retaliation airstrikes in the Strip, could end fighting immediately or lead to further escalation.

"Everything is happening simultaneously, " said the official. "On one hand, there are talks, but on the other hand, they continue firing rockets and we also continue to attack. This could be resolved tonight or tomorrow, but it could also escalate further".

UN Special Coordinator for the Middle East Peace Process Nickolay Mladenov arrived in Cairo on Wednesday as efforts grew to deescalate the worst bout of fighting between Israel and Gaza militants in recent months.

Mladenov landed in the Egyptian capital via Tel Aviv and was scheduled to meet with President Abdel-Fattah el-Sissi, Egyptian officials said.

Islamic Jihad leader Ziad Nahala will also reportedly travel to Cairo to join the negotiation talks brokered by Egypt and the U.N.

Israeli citizens sheltering themselves during a rocket attack (Photo: AFP)

Egypt often acts as a mediator between Israel and Gaza militants, and brokered a ceasefire deal to end the previous round of fighting in Gaza in May.

As of Wednesday night, the IDF said 400 rockets were fired at Israel by the Islamic Jihad and that the Iron Dome missile defense system has managed to intercept dozens of rockets with a 90% success rate.