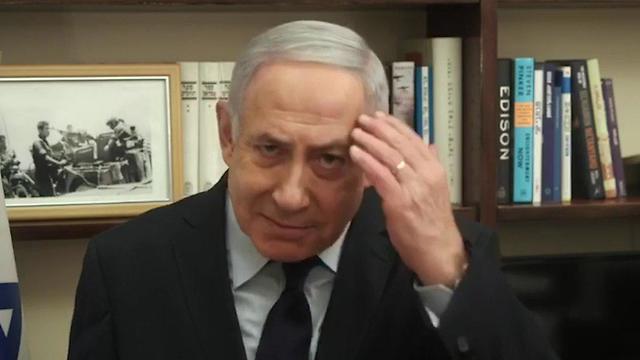 With days left to form government, Gantz under attack from Netanyahu

Analysis: If Gantz-led minority government is indeed formed, Netanyahu will be out as PM within days, making third election a much more lucrative prospect for Israel's leader, who has gone on the offensive appealing directly to Blue and White MKs

With four days left for Blue and White leader Benny Gantz to form a coalition before his mandate expires Wednesday, the prospect of a minority government is looming. This has prompted Prime Minister Benjamin Netanyahu to sound the alarm, warning a coalition reliant on the Arab-dominated Joint-List will risk Israel's security.

If a minority government is formed, he will be out as prime minister within days.

Prime MInister Benjamin Netanyahu speaks to former military chiefs on his Facebook page " have you lost your mind?"

If unable to form a coalition, Gantz will return the mandate given to him by President Reuven Rivlin, and the Knesset will require a 61- member majority to back any other candidate.

Failing that, new elections will be called, which would be most likely held in March 2020.

In a Facebook message to his followers, Netanyahu warned that a government reliant on support from members of the Joint List, will constitute a security disaster and an existential risk for Israel.

Appealing directly to the former military chiefs in the Blue and White list - MKs Gabi Ashkenazi and Moshe Ya'alon - Netanyahu asked if they had lost their minds when considering a coalition that would require Arab MKs to sign off on any military action.

"These are the same people who had branded you and other members of the military as war criminals," he said.

A narrow Gantz led-coalition could only exist with the agreement of Yisrael Beytenu Chairman Avigdor Liberman, who in the past had insisted he would only support a liberal national unity government, but now holds the key that can end this political stalemate.

Netanyahu's latest public effort is seen by some political analysts, as the start of a new political campaign ahead of the potential third election he is believed to be pushing for.

Meanwhile, Benny Gantz met with President Reuven Rivlin on Saturday and briefed him on his efforts to form a new government.

Following the meeting the Blue and White leader wrote on Twitter account that he is making every effort to avoid another election that the Israeli public does not want, calling on Netanyahu to stop his "tricks and spins" and agree to negotiate a unity government.

The two leaders are at odds over who should be first to lead a unity government if and when one be formed. Gantz is still holding on to his campaign promise that his party would not join a government led by Netanyahu who is facing possible indictment on three corruption charges.