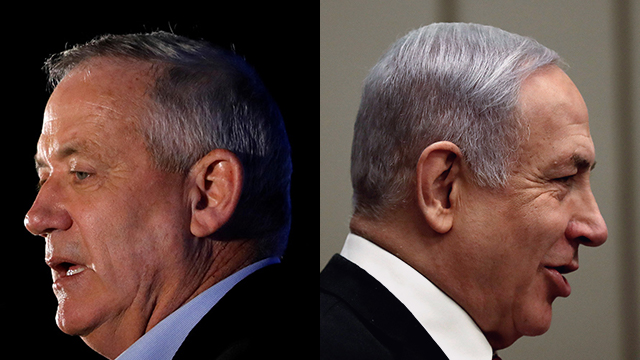 Likud and Blue and White are more frenemies than rivals

Opinion: Israel's two largest political factions are so similar it's amazing that they haven't yet formed a unity government in order to save the country from an unwanted third election cycle that will likely yield the same results

The Blue and White party and the ruling Likud have similar positions, views and objectives. Rarely in Israeli political history have the two largest Knesset factions been so similar on so many key issues.

Being both centrists, they are more akin to sister parties than adversaries, and their differences are detectable only through a microscope. From the question of religion and state to the issue of the Arab minority. The vision of Blue and White could easily be passed off as Likud's, if you only tweak it a little bit.

When the late Prime Minister Ariel Sharon split from Likud taking more than half the party and its supporters with him to form Kadima, his policies shifted too, and he became a champion of reconciliation with the Palestinians and a negotiated settlement. He went as far as to tell the UN General Assembly that finding a path to peace is his life's mission.

Blue and White adopted nothing of Sharon's willingness to promote peace.

They are promoting no pullback of troops, nor are they advocating annexation.

Likud too has reversed their call for annexation, despite Prime Minister Benjamin Netanyahu's election promises. Both parties are content with a Jewish presence in the West Bank, alongside a Palestinian one.

The question is why then, do the two parties not enter a unity government? What are they waiting for? Avoiding another election campaign is in the hands of the leaders of both parties.

But, the unity government must be built on the basis of Likud and Blue and White, and their similar positions. There is no need to add parties whose ideologies differ.

With Netanyahu's expected indictment on corruption charges looming, his time as the country's prime minister is limited.

Despite a law that allows him to remain in office until all legal avenues in his cases have been exhausted, Israeli political reality will force him out. Never was a serving prime minister a defendant in court.

With time running out, the public implores its leaders, Gantz and Netanyahu, to not allow this opportunity to slip by.

Don't be so narcissistic, so blindsighted by personal interests.

Save us from another unwanted election that will likely yield the same results yet again.