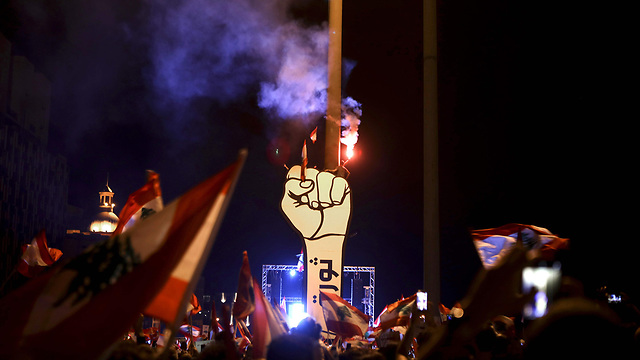 Lebanese protesters lash out at Hezbollah over economic woes

The Shiite militant group has been hailed for decades as the country's protector against Israel and defender of the poor, but now the protesters want the Lebanon's political elite, including Hezbollah, out

Young men chanting the "people want to bring down the regime" gathered outside the office of Lebanese legislator Mohammed Raad, the powerful head of Hezbollah's parliamentary bloc. One shirtless man grabbed a metal rod and swung it at the sign bearing Raad's name, knocking it out of place as others cheered.

It was a rare scene in the southern market town of Nabatiyeh, a Hezbollah stronghold. The protests engulfing Lebanon have united many across sectarian lines and shattered taboos, with some taking aim at leaders from their own sects, illustrating a new, unfamiliar challenge posed to the militant group.

Iranian-backed Hezbollah built a reputation among supporters as a champion of the poor and a defender of Lebanon against Israel's much more powerful military. It and its Shiite ally, the Amal party, have enjoyed overwhelming backing among the Shiite community since the end of the 1975-1990 civil war, making them a political powerhouse that, along with allies, has dominated recent governments.

But now many protesters group Hezbollah into the ruling class they are revolting against, blaming it for wrecking the economy with years of corruption and mismanagement.

"All of them means all of them, and Nasrallah is one of them," protesters have chanted at some Beirut rallies. The demonstrations that erupted October 17 spread throughout the country, including predominantly Shiite areas in the south and the eastern Bekaa Valley.

The heavy participation of the Shiites ... posed a main challenge: that there's a large number from the sect that doesn't accept the current situation, said Hilal Khashan, professor of political science at the American University of Beirut. That's why there was a swift and decisive decision to nip this in the bud.

In several instances, men suspected of being Hezbollah and Amal supporters beat up protesters and destroyed their tents. Some of those who had criticized Nasrallah and Berri on social media appeared in videos, after apparently being beaten, to apologize for what they did.

Amal denied any link to those behind the beatings, saying in a statement that they should be arrested and that they violated the movement's belief in freedom of opinion.

Hezbollah has survived many threats over the past years, including charges by a U.N.-backed tribunal for the killing of former Prime Minister Rafik Hariri in February 2005 - an accusation Hezbollah strongly denies - a ruinous war with Israel in 2006 and the war in neighboring Syria, where Hezbollah has sent thousands of fighters to back President Bashar Assad, losing an estimated 2,000 men.

But now Hezbollah is being attacked by the very constituency they purport to speak for, Heiko Wimmen of the International Crisis Group said.

Hezbollah is on the defensive for having become part or the ruling elite, which is clearly a disconcerting experience for the leadership, he said, though he noted anger is far stronger at Amal, whose leader Berri has been directly entrenched in politics for decades.

Hassan, a protester from the southern city of Tyre, said he supports Hezbollah's resistance against Israel, calling it a red line that must not be undermined. But its other policies are a different story.

"The party ... has been silent about the symbols of corruption with the logic that we don't want a civil war, but these policies have hurt the south," he said, asking to be identified by one name, citing security reasons.

Protesters in Nabatiyeh have joined those elsewhere in the country in banging pots and pans in protest; some cried Against poverty and against hunger, the people are all in pain, according to videos posted online.

An activist from Nabatiyeh, who asked to be identified only as Abdel-Jaleel, distanced protesters from those who attacked the Hezbollah lawmaker's office in the town, whom he called troublemakers. But he said the demand for change - despite support for the resistance - was real among a new generation growing up to find little jobs or hope.

Hezbollah has sought to show it's sensitive to the complaints. Last week, Nasrallah said in a speech that authorities investigating corruption should start with looking at Hezbollah members. "Begin with us," he said.

Hezbollah's popularity has also stemmed from a vast array of services, through education, health and social networks. It says it's still able to maintain that network despite intensified sanctions by Washington, which designates Hezbollah as a terrorist organization.

Wimmen, like other observers, says Hezbollah is strong enough to survive because its base is largely cohesive and the resistance narrative still works.

But it can't ignore the alienation over economic woes, he said, and it is short on solutions.

Nasrallah has tried to walk a fine line. In speeches, he expressed sympathy for protesters demands but also accused foreign powers of exploiting them to undermine his group and warned against dragging the country into civil war. Some of the Shiites who initially joined demonstrations have stayed away after the speeches.

Hardcore Hezbollah supporters and some officials contend that the U.S., some Arab Gulf states and other rival nations are trying to take advantage of the protests to undermine the group.

Senior Hezbollah official Sheikh Ali Daamoush said the group differentiates between protesters legitimate demands and those with agendas who want to take advantage of the protests to achieve political goals that are not in Lebanon's interest."

On a recent day when the AP visited Hezbollah's southern Beirut stronghold of Dahiyeh - accompanied by a Hezbollah guide - there was no sign of the turmoil and paralysis gripping the rest of the country. Streets teemed with cars, a man in a uniform picked up trash as men and women, some in overflowing black abayas, others in jeans, passed by.

But there is sympathy for some of the protesters complaints.

"There are legislators who are stealing, there are officials who are stealing. People will rise against you," one resident, Ali Sharafeddine said, even as he expressed respect for Nasrallah and Berri.

Mohamed Harb said he understood all too well the economic hardships driving protesters. Everything has become expensive, he said. Working at a hospital, he recently took a second job selling vegetables and still struggles to make ends meet.

But he remains unequivocal in his support for Hezbollah and Nasrallah.

"Hezbollah means everything to me," he said. "If Nasrallah tells us to go die, we go die."