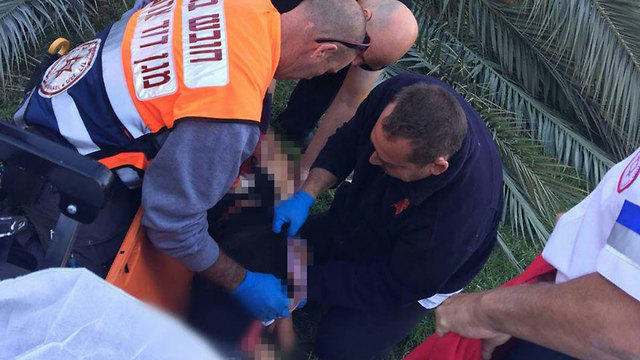 Howling winds ravaged most parts of the country on Monday, leaving two young girls injured after a palm tree was uprooted by the gusts and collapsed on the children making their way to school in central Israel.

One of the girls, aged 10, initially suffered moderate and was taken to Meir Medical Center in Kfar Saba where her condition deteriorated and is now described as serious.

One of the injured being treated

The other girl, aged 8, was taken to Laniado Hospital in Netanya and her condition is described as light. She sufferers from injuries to her head and legs.

"I saw a large palm tree that collapsed and a girl, aged about 9, trapped underneath it," said MDA paramedic Moshe Gafni. “She was fully conscious and suffered from multisystemic injuries. Near her was another girl who suffered injuries to her head and legs.”

A palm tree which fell on 2 girls in central Israel   (צילום: יאיר שגיא)

The incident comes after temperatures dropped significantly overnight Sunday and winds tore through most parts of Israel in what appears to be the first winter weather system this season.

According to the Meteo-Tech meteorological company, winds in the northeastern Mediterranean Sea will reach speeds of up to 40 kph (25 mph), while the winds on the northern shores will reach the speed of up to 55 kph (34 mph).

Despite the low temperatures, the weather will be dry and partly cloudy. Mist is expected in some parts of the country.