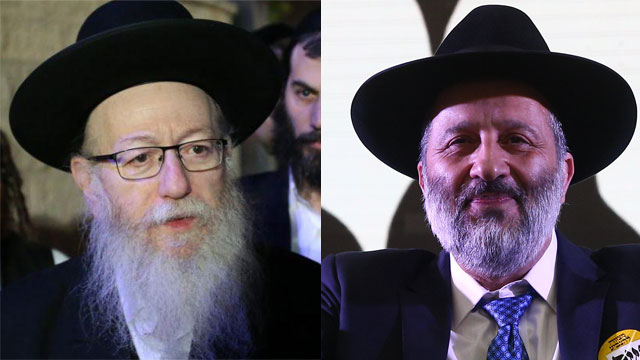 With the clock to form new government running out, Shas and United Torah Judaism parties say they're ready to make concessions on matters Yisrael Beytenu leader most concerned with in an effort to lure him back into right-wing bloc

Senior officials of the ultra-Orthodox parties said Monday they are willing to talk with anti-religious hardliner Avigdor Liberman about a compromise on key issues as efforts continue to end Israel's political limbo.

Blue and White leader Benny Gantz has just three days left to form a coalition before his mandate to form government needs to be returned to President Reuven Rivlin.

The comments came just a day after United Torah Judaism Chairman Yaakov Litzman said the most he is willing to compromise on is “breakfast.”

The ultra-Orthodox said that although they haven’t yet received a concrete offer from Prime Minister Benjamin Netanyahu, they believe Likud is making behind the scenes efforts to lure the Yisrael Beytenu leader back to the right-wing bloc.

The religious and ultra-Orthodox parties are already gearing up for the talks on the yet-to-be revealed offer, asking to separate the “halachic” issues from the “public” ones.

While they believe they can’t compromise on halachic matters such as conversion to Judaism and marriage registry, they can make concessions on public issues such as the Western Wall and public transportation on Shabbat, once they've received approval from the Council of the Great Torah Scholars.

The ultra-Orthodox parties believe that they can compromise on the issues Liberman is most concerned about - namely, they would oppose the potential legislation in these areas but would not veto, and allowing the bills to pass the Knesset.

In addition, the issue of public transportation on Shabbat is an initiative of local authorities and therefore does not require any legislation.

"Halacha-related issues should not be compromised on because we have no authority to give up on matters concerning Judaism," said Shas and the United Torah Judaism parties in a statement. “We need to understand what Netanyahu really wants in order to know how we can move forward.”

“If they want for the ultra-Orthodox to be flexible, they need to give us something concrete and with that we’ll go to the rabbis for approval."