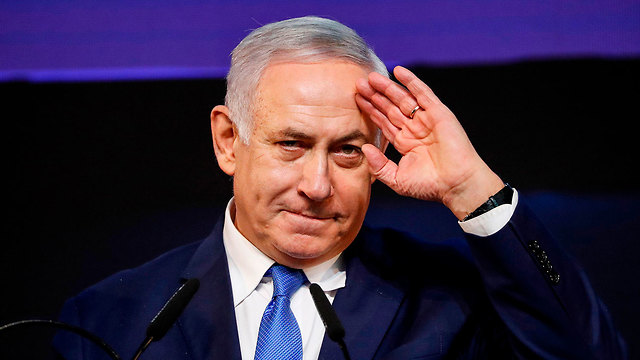 Netanyahu calls decision to indict him an 'attempted coup'

Enraged PM goes on the offensive, slamming AG and police investigators, who he claims were 'after him'; 2 other defendants, Elovich and Mozes, also issue statements expressing their disappointment over what they see as unfair charges

Prime Minister Benjamin Netanyahu on Thursday called a criminal indicment against him an attempt at a "government coup" and he will continue to "lead Israel." It is the first time in the country's history a sitting prime minister has been charged with a crime.

In a televised speech shortly after the indictment was announced, Netanyahu, 70, claimed that the investigation against him was tainted by bias, saying the police investigators "weren't after the truth, they were after me."

“This evening we are witnesses to an attempted government coup against the prime minister, using false allegations and stained investigations,” said Netanyahu. “You must have noticed that the attorney general’s decision was made and announced at an unprecedented speed, and I would say during the most sensitive time for our political system since the establishment of the state," he said.

Protest in support of Netanyahu following the indictment (Photo: EPA)

“The process is intended to topple an incumbent prime minister from the right. It was designed to bring me down. Me, who unlike many of my opponents and the media, wants to see a free market here not only when it comes to the economy but in the media as well," he added.

"It is time for the public to receive clear answers about all of this and also about the tainted investigations conducted against me, in which they were not after the truth, they were after me.”

Netanyahu then went on a lengthy rant, accusing the investigators of threating and blackmailing state witnesses until they told them "what they wanted to hear, which isn't what actually happened."

The prime minister finished the defiant speech by saying he will not resign and urged to "investigate the investigators."

The other defendants in the indictment have also issued statements expressing their disappointment over Mandelblit’s decision.

Shaul Elovich and his wife Iris, both indicted on bribery charges in Case 4000, said they “regret” the attorney general’s decision to indict them

“Based on the evidence in the case, we are convinced that an indictment could have been avoided, said Attorney Jack Chen, who represents Elovitch. “Once the case is passed for judicial review, we hope that the three-year-long slanderous accusation and leaks will finally stop,” he said.

“We trust that the court will reach the conclusion that, based on the evidence, Shaul and Iris Elovich did not commit the offenses attributed to them."

Arnon Mozes, indicted on bribery charges in Case 2000, said the interpretation of the relationship he had with the prime minister as bribery is a “distorted interpretation” of facts.

"Moses did not offer Netanyahu any benefits,” said attorneys representing Mozes in a statement. “The conversation between the two shows that Moses tried to convince Netanyahu to be interviewed, and suggested a writer who would occasionally write opinion pieces in the newspaper, which was clearly in the interest of Yedioth Ahronoth,” said the statement. “That was offered to Netanyahu even before the conversation that is at the heart of the case.”