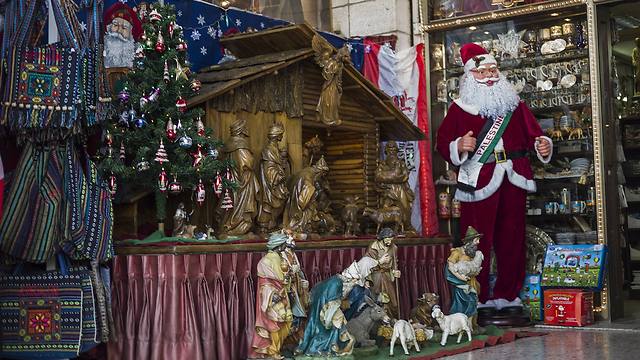 Just in time for Christmas, wooden manger relics heading from Rome to Bethlehem

Items said to be from Jesus' makeshift bed are to be returned after more than a millennium, expected to be main attraction for pilgrims from all over world who visit city each Yuletide

Wooden relics said to be from the manger that held the infant Jesus will be returned from Rome to Bethlehem in time for the Christmas season, Palestinian officials said on Friday.

Bethlehem's mayor, Anton Salman, told the Palestinian news agency WAFA the move followed President Mahmoud Abbas's most recent visit to the Vatican, when Abbas asked Pope Francis for the return of the fragments held in the Basilica of Santa Maria Maggiore in Rome.

Salman said the relics were taken from Bethlehem around 1,000 years ago and are now likely to be placed inside Saint Catherine's Church, adjacent to the Church of the Nativity in Manger Square, the reputed site of Jesus's birth.

There was no immediate confirmation from the Vatican. But Amira Hanania, a member of Abbas's Higher Committee of Churches Affairs, said the relics would arrive on November 30, the day the Palestinian town traditionally lights its Manger Square Christmas tree.

"It is an historic move. It returns to its original place, and it will be a factor of attraction to believers from inside Palestine and to tourists from all over the world," she said.

"To celebrate Christmas with the presence of part of the manger in which Jesus Christ was born will be a magnificent and huge event."

Although the provenance of ancient relics is often questionable, they are revered by the Christian faithful, among whom are the coachloads of pilgrims who squeeze through a narrow sandstone entrance in the Church of the Nativity all year round to visit the birth grotto that is its centerpiece.

The return comes amid a wider discussion over whether Western collectors and museums should return objects to their countries of origin.

The website of Santa Maria Maggiore says the relics currently lie before the basilica's main altar in a crystal reliquary shaped like a crib that "contains pieces of ancient wood which tradition holds to be part of the manger where the Baby Jesus was laid".

It said that the crypt was constructed by Virginio Vespignani at the behest of the mid-19th century Pope Pius IX "to contain the sacred relic of the Holy Crib".

Preparations for Christmas are under way in Bethlehem, especially for Christians who make up around one percent of the Palestinian population in Gaza, the West Bank and East Jerusalem.

While the security situation has eased around the town in recent years, Israeli checkpoints guard the entrances to Bethlehem, which lies just south of Jerusalem in the West Bank.