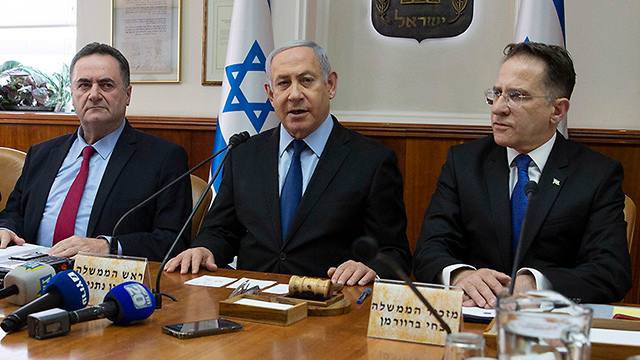 High Court petition to oust Netanyahu is not the way

Opinion: The prime minister's opponents want to the courts to decide whether he can remain in power while facing indictments, but such a step could backfire, whatever the outcome, and only serve Netanyahu's interests

In some circles, let's call them "the enlightened public", there is a feeling that this is time to deliver another blow to Prime Minister Benjamin Netanyahu, who is already limping.

Netanyahu's tempestuous performance immediately after the attorney general's decision to indict him wasn't his most glorious nor his more convincing and he only harmed himself.

Not all his claims were unfounded, but these claims aren't the answer to the very compelling evidence showcased in the indictment.

Even if there were political motivations in play during the investigation - and even givign him the benefit of the doubt that some outrageous steps were taken by police – no one can hide the corruption, even if it's not necessarily criminal.

Last Friday I went grocery shopping as usual at the Carmel Market in Tel Aviv, and I have news for the Likud leadership and Netanyahu himself – public opinion it is a-changin'.

As much as the discourse on social media is becoming increasingly bellicose, it was there at the market where I heard fans of the Likud leader say that his time has passed – he has become a liability to the party.

The 70-year-old is desperately clutching onto his seat and he efforst to do so just aren't working as well anymore.

There are politicians in the Likud leadership who understand the present situation - they understand that something major has befallen them.

The volition to strike while the iron is hot is leading members of the "Just Not Bibi" camp to peition the High Court of justice – they want the court to do exactly what Netanyahu refuses and Likud is too hesitant to do – depose the prime minister through legal channels rather than political.

We can assume the judges won't rule on these petitions out right off the bat. They will solemnly discuss them, a move that was approved by former Supreme Court Justice Eliyahu Matza, and this is exactly what Netanyahu needs. He wants to prove to that the judges and jurists are the ones in control of the State of Israel.

A protest in support of Benjamin Netanyahu in Jerusalem after his indictment for corruption was announced Thursday (Photo: AFP)

Netanyahu's fan base claims and will keep claiming that the law is very clear about a prime minister who has a criminal procedure running against them – there is simply no law that prevents Netanyahu from serving as prime minister.

Netanyahu's supporters will claim that the judges and jurists are trying to trump the rule of law using legal casuistries. Maybe Netanyahu is corrupt, but corrupt people are also right from time from time.

The minister who came out most vociferously in Netanyahu's defense is Minister of Transportation Bezalel Smotrich, who called on Friday for the public to take to the streets or else Israel will fall in the hands of a "judicial dictatorship."

On the other hand, most Likud officials are not automatically backing Netanyahu – and their silence is roaring. They want to stay in power and understand that Netanyahu is no longer an asset, but a petition to the High Court of Justice could shove them back in Netanyahu's corner whichever way it turns out.

If the petition is upheld it will serve as proof that the judicial oligarchy is trying once again to replace the political process. If the appeal is rejected - Netanyahu will insist that he can stay in power.

No matter what decision the court makes – this will be bad for Israel.

israelis need to some restraint and let the political process do its thing at such a sensitive time.

Israel needs its democracy stabilized and a petition to the High Court will have the opposite effect.