Army inquiry shows at least three of the terrorists that perpetrated attack were Egyptians; clips, radio communication show IDF did everything in its power to prevent Egyptian troops from getting hurt

The IDF did everything in its power to prevent Egyptian troops from getting hurt in last Thursday's multiple terror attacks near Eilat, inquiries conducted by both the IDF and the Egyptian army showed. The IDF also found that at least three of the terrorists were Egyptian citizens.

Head of the General Staff's Planning Branch Amir Eshel, who traveled to Cairo early this week to present to Egyptian officials the findings of the IDF's initial investigation, even brought photographic evidence to the fact. 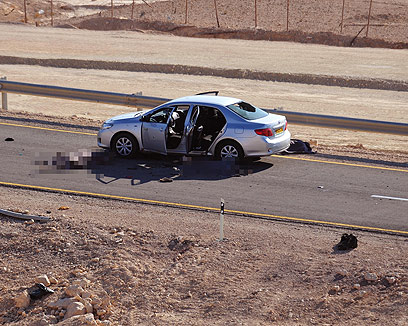 Videos shot from the aircraft show that the troops intentionally diverted fire from the Egyptian all-terrain vehicles and soldiers towards open areas near the border base, from which the terrorist sniper fire originated.

The terrorists, who positioned themselves a few dozen meters from the Egyptian military post, launched an RPG rocket at one of the helicopters, and directed machine gun fire at it.

In addition, an examination of the bodies of the terrorists killed by the IDF clearly showed that at least three of them were Egyptian citizens. One was a member of a radical Egyptian group who was tried in the country. 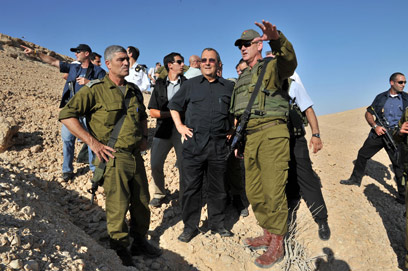 He escaped from prison during the first days of the Egyptian revolution, when several Cairo prisons were broken into as hundreds of imprisoned Jihadist terrorists escaped to Sinai. Many had also reached the Gaza Strip and Egypt is demanding that Hamas extradite them.

The Egyptian terrorists joined Palestinian operatives from the Popular Resistance Committees and together they perpetrated the coordinated attacks. Israel also has further proof that joint Palestinian-Egyptian terror cells were in Sinai for weeks and were assisted by Bedouins in the region.

Also according to the IDF investigation, the Egyptian troops noticed the presence of the terrorists even before the attack was launched, but did nothing about it. Only later that evening did an officer and a few soldiers leave their post, evidently to stop the ongoing sniper fire. The terrorists, who were wearing uniforms similar to those of the Egyptian army, resisted.

Possibly at this moment, when the troops and the operatives merged together, the Egyptian soldiers were shot. It remains unclear who fired the deadly shots, as the soldiers' bodies have yet to be autopsied by the Egyptian authorities. 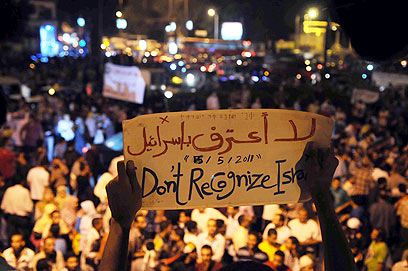 Protesters in front of Israeli embassy in Cairo (Photo: AFP)

Israel has photographic evidence that GOC Southern Command Maj.Gen. Tal Russo personally ordered the forces fighting on the ground and in the air to be careful not to hit the Egyptian military post and its soldiers.

Israel was aware of these facts last week, but decided against releasing them in order to avoid embarrassing the Egyptian army and to dodge a media dispute over the versions of the events.

However, the information was submitted to Egypt's Supreme Council of the Armed Forces, which in turn invited an IDF representative, Maj.-Gen. Eshel, to present the findings in Cairo. Some of the findings were published in an Egyptian newspaper on Wednesday.

The Israeli authorities are aware that the Egyptian interim government is under great pressure to sever diplomatic ties with Israel. One of the primary reasons that Prime Minister Benjamin Netanyahu, Defense Minister Ehud Barak and the eight-minister forum decided against ordering an intensive military retaliation against the terrorist movements firing rockets from Gaza on Saturday night was their desire to avoid further damage to the relations with Egypt.

It was clear that such an operation can ignite the rage of the Egyptian public and result in further pressure from the Muslim Brotherhood to annul the peace accord with Israel.

Netanyahu and Barak, backed by most of the top ministers, decided instead to wait for a window of opportunity that would allow them to eradicate the rocket fire and terror acts from Gaza – after the spirits have calmed down.

Meanwhile, the IDF continued with its new policy of thwarting any operations planned by terror groups in Gaza and Sinai. As part of the strategy, an Islamic Jihad operative was killed in the Rafah region early Wednesday morning. According to intelligence obtained by Israel, the operative was planning an attack that was to be launched from Sinai.

Moreover, official sources in Egypt told the daily newspaper Al-Shorouk that the Egyptian army has mapped out the tunnel network connecting the Gaza Strip and Sinai ahead of shutting them down. According to the report, bolstered Egyptian forces secured their side of the border in and around Rafah, and vigorously searched individuals crossing the border.