The question is not whether the Sinai Peninsula should be re-militarized; it already is – by Jihadists, Islamists, the Muslim Brotherhood, al-Qaeda and Hamas.

Recent bombings of oil and gas facilities and a terrorist attack from Sinai that killed eight Israelis and wounded nearly 40 demonstrate that this area has become a critical land bridge for terrorists between Egypt and Gaza to launch attacks on Israel.

We are now hearing intelligence officials warning that weaponry flows freely from Libya, Iran and Sudan through Egypt into Sinai and the Gaza Strip, turning the border with Israel into a strategically vulnerable area. 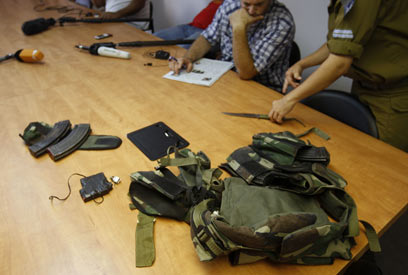 Equipment carried by Sinai terrorists (Photo: AFP)
However, this catastrophe should not have been a surprise. The transformation of the Sinai Peninsula into a transit area for weapons and terrorists was obvious for many years. However, because Sinai is under Egyptian sovereignty as part of the Camp David Accords, Israel relied on Egyptian authorities to control this area and did not adequately protect itself.

The Sinai has now become an extension of the Gaza Strip with one main difference: it is under Egyptian sovereignty. In order to regain control Egypt will have to deploy a massive number of troops to subdue the Bedouin and hostile forces. Their hands full with domestic turmoil, it is doubtful whether Egypt's leaders can or want to do it, as Israel is the primary victim of semi-anarchy.

Israeli leaders who ignored these developments were either grossly incompetent or politically motivated. Once Hamas took over the Gaza Strip, the imperative of building a fence along the Egyptian border should have been the highest priority. It was not.

Although Israel has no control over what happens in other countries, it does have the right to protect itself.

A defensive barrier along the border is a priority, backed up by a substantial buffer zone on the Egyptian side into which entry is prohibited. Moreover, as Egyptian surveillance is unreliable, Israeli monitoring aircraft must be given full Egyptian cooperation. Combating terrorism should not be restricted by borders.

Our leaders must also realize that wasting valuable resources and manpower on destroying Jewish-owned property in Judea and Samaria makes no sense. These forces should be immediately shifted to protecting Israeli citizens in vulnerable areas.

These measures will stabilize the border, but will not prevent Sinai from becoming hostile territory. If Egypt cannot or will not assert its control over the area, Israel should declare the Camp David Accords null and void and destroy every terrorist enclave in Sinai

Would we be better off with a powerful Egyptian military presence in the Sinai – or with a powerful terrorist presence? In the end, if we are not careful, we may wind up with both.

The author is a historian, writer and journalist living in Jerusalem


פרסום ראשון: 09.02.11, 00:43
commentsend to friendshareshare
See all talkbacks Close all talkbacks
new comment
Next
Previous
Warning:
This will delete your current comment
cancelOk