Turkey is preparing to challenge Israel's blockade on Gaza at the International Court of Justice, the foreign minister said Saturday, ratcheting up tensions between the once close allies.

Ahmet Davutoglu's comments came a day after Turkey expelled the Israeli ambassador and severed military ties with the country angered over its refusal to apologize for last year's deadly raid on a Gaza-bound aid flotilla that killed nine pro-Palestinian activists.

In an interview with Turkey's state-run TRT television, Davutoglu dismissed a UN report into the raid that said Israel's naval blockade of Gaza was a legal security measure. Davutoglu said the report - prepared by former New Zealand Prime Minister Geoffrey Palmer, and former Colombian President Alvaro Uribe, and presented to UN Secretary General Ban Ki-moon - was not endorsed by the United Nations and was therefore not binding. 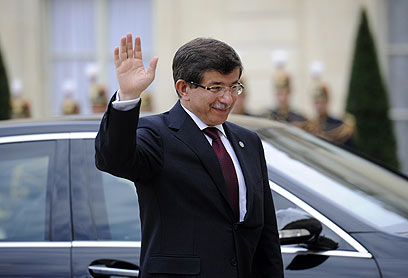 "We are starting the necessary legal procedures this coming week," he said.

The minister said the UN report released Friday contradicted an earlier report on the Gaza flotilla incident which found that Israeli forces violated international law when they raided the flotilla. That report was prepared in September by three human rights experts appointed by the UN's top human rights body.

Davutoglu also warned Israel that it risks alienation among Arab nations by resisting an apology.

"If Israel persists with its current position, the Arab spring will give rise to a strong Israel opposition as well as the debate on the authoritarian regimes," he said.

Turkey to boost presence in Mediterranean

Meanwhile, a Turkish source told the Hurriyet newspaper that "the eastern Mediterranean will no longer be a place where Israeli naval forces can freely exercise their 'bullying' practices against civilian vessels."

The source said this is likely to happen following Turkish Foreign Minister Ahmet Davutoglu's statement that “Turkey would take every precaution it deems necessary for the safety of maritime navigation in the eastern Mediterranean.”

The newspaper quoted Turkish diplomats as saying that the Turkish navy will boost its activity in the eastern Mediterranean and hold reconnaissance in international waters. “A more aggressive strategy will be pursued. Israel will no longer be able to exercise its bullying practices freely," one of the diplomats said. The sources said that Turkish navy vessels are slated to escort aid ships to Gaza in the area between Cyprus and Israel, adding that one can expect more Turkish warships in the region. The warships are also slated to operate in the area where gas reserves were found by Cyprus. Ankara claims the area belongs to Turkey.

The paper also reported that Prime Minister Recep Tayyip Erdogan plans to visit the Gaza Strip in the coming weeks.

“Our prime minister has already instructed the Foreign Ministry to set a date for the visit. We are looking for the best timing for the visit,” one source said. “Our primary purpose is to draw the world’s attention to what is going on in Gaza and to push the international community to end the unfair embargo imposed by Israel.”

European foreign ministers including France's Alain Juppe and Germany's Guido Westerwelle on Saturday urged Israel and Turkey to resume dialogue after a rift over a deadly Israeli flotilla raid.

"Our wishes are like those of the UN secretary general who said that this dispute between Israel and Turkey must be resolved through dialogue and mutual understanding, not via other means," Juppe told reporters at an informal EU foreign ministers meeting in the Polish Baltic Sea port of Sopot.

UN chief Ban Ki-moon appealed Saturday for Turkey and Israel to make up after Ankara took retaliatory measures over the Jewish state's May 2010 raid on a Gaza-bound Turkish flotilla which left eight Turks dead.

"The German government is very worried by the recent dispute between Turkey and Israel," Westerwelle said at a separate press conference in Sopot Saturday, urging "all parties" to seek a solution.