Obama, do us a favor

The “ungrateful” Benjamin Netanyahu, as former Secretary of Defense Robert Gates characterized him, rushed early Saturday to ask US President Barack Obama to do him a favor and rescue the six Israeli security guards besieged in our Cairo embassy. The phone call between Netanyahu and Obama unequivocally demonstrated Israel’s existential dependence on America. Early Saturday, one door separated the six embassy guards from a raging Egyptian mob, and the one thing left for Netanyahu to do after the heads of Cairo’s supreme military council refused to take his calls was to call his friend in the White House.
Embassy Siege
Tantawi didn’t respond to Netanyahu, Barak during crisis
Attila Somfalvi
Egyptian officials claimed head of Supreme Military Council 'could not be located'. Stranded Israeli security guards evacuated from embassy while wearing keffiyehs and Muslim garments
Tantawi didn’t respond to Netanyahu, Barak during crisis
The peace treaty between Israel and Egypt was signed on the White House lawn in 1979 and was premised on the realization that the US will also be a partner and guarantor that the agreement would be honored, even if Egypt’s regime changes. The treaty withstood the test of time, even though the Egyptian government was embarrassed during the two wars conducted by Israel in Lebanon, in 1982 and in 2006. However, the current test following the regime change in Cairo and Hosni Mubarak’s ouster is a whole other story. The Israeli-Palestinian conflict continues to serve as the fuel that fans the flames of public opinion in Egypt and in neighboring countries, and Netanyahu cannot be absolved of his share of the responsibility for this fire.

The late Menachem Begin promised to embark on negotiations for the establishment of an autonomous Palestinian rule. That move calmed the Egyptians, even though Begin did not intend to grant the Palestinians a state. Netanyahu, on the other hand, declared that he’s adopting the two-state notion, yet in practice he has done everything to prove that he has no intention to implement his statement. 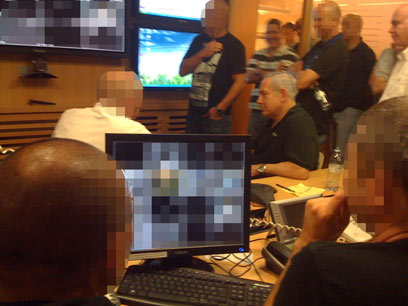 Netanyahu watches Cairo embassy events unfold (Photo: GPO)
And so, after two and a half years in the Prime Minister’s Office, against the backdrop of constant deterioration in our ties with the White House, we are back at where this article started – Israel’s dependence on the US.

The Egyptian leadership also cannot afford to disappoint Washington. After 30 years of generous American assistance via weapons and economic aid that provides food for 80 million Egyptians, Cairo will not be foregoing the peace treaty with Israel. After all, it’s a package deal: Ongoing aid hinges on the peace agreement. In the ever-changing reality around us, the US remains the sole supporter an Egyptian regime based on the army and relatively moderate parties can rely on.

Prime Minister Netanyahu’s and Foreign Minister Lieberman’s appearances on television Saturday were coordinated, and for a change they spoke in one voice: No impassioned zeal in the face of the crisis vis-à-vis Egypt. They will have other opportunities to talk about the national honor trampled over the weekend. For the time being, Israel’s ambassador in Cairo can only be envious of his Egyptian counterpart in Tel Aviv. While the former had to flee the country urgently, the entrance to Egypt’s embassy in Tel Aviv was manned Saturday night by one bored Border Guard police officer who gazed at the Egyptian Republic’s flags flying in the summer breeze.