A group of 1,000 Israelis especially selected to take part in Spencer Tunick's first mass nude shoot at the Dead Sea, arrived by buses overnight at the famous landmark on Saturday. The chosen location was not revealed until the moment of arrival so as to prevent religious officials or curious bystanders from disturbing the photo shoot.

The group of Israelis, consisting of both men and women ages 18 to 77, gathered on the beach around 1 am, awaiting the photo session to begin with the sunrise. When the sun finally came up, Tunick instructed a 1,000 Israelis to enter the salty water, as he photographed them floating in the Dead Sea. 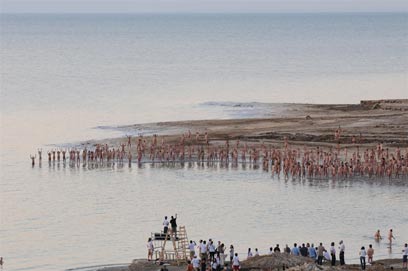 Spencer Tunick shoots Dead Sea photo (Photo: Yaron Brener)
A second photograph was taken as participants were told to stand along the edge of one lagoon, while the third and final photo displayed the group covered in mud.

In the end, it was not the religious officials who tried to disrupt the photo shoot but in fact curious spectators, who were able to discover the secret location and attempted to get closer. Some even succeed to get a peek using light planes and parachutes. 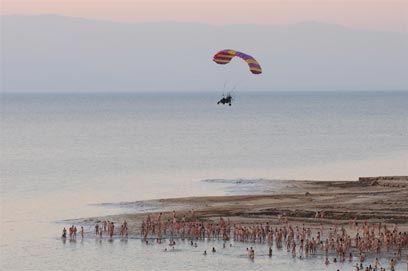 Curious spectators hover nearby (Photo: Yaron Brener)
Tunick told Israeli reports he had chosen to hold the photo shoot on Saturday so that no one would walk along the beach and see a naked person. The media, including journalists from all over the world, were stationed a considerable distance away from the naked group of Israelis, as the photo shoot began.

Tunick said Wednesday he believes Israel is the only country in the Middle East with the religious freedom for one of his trademark mass shoots of nude volunteers. Despite his initial fears over such a project in Israel, he mentioned that he is not the first artist to deal with nudity in the country. 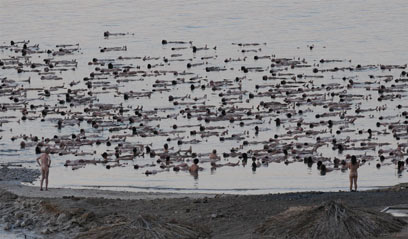 Israelis floating in Dead Sea (Photo: Yaron Brener)
The famous visual artist claimed his is not a pioneer, but only following the footsteps of superb Israeli artists.

Tunick insisted that the Dead Sea shoot was not about challenging the region's delicate religious sensitivities or the turmoil and conflict associated with the Middle East. 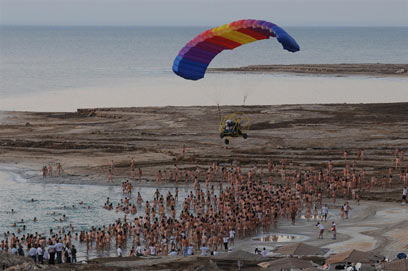 Attempting to disturb the photo (Photo: Yaron Brener)
He said his aim is to deliver an environmental message highlighting the plight of the world's lowest and saltiest body of water, which is rapidly drying up. "Hopefully my work with this will be associated with the human-made natural disaster at hand, and not with war," he said.