Hamas official Osama Hamdan declared Friday that Israel had pledged not to hurt released prisoners as part of the Shalit deal, the London-based al-Hayat newspaper reported. Hamdan was responding to claims made by Shin Bet chief Yoram Cohen suggesting no prisoner was immune from assassination or a return to prison.

Hamdan rejected criticism over the prisoner swap deal and claimed it constitutes a distinguishable national triumph despite the fact that such leaders as Ahmed Sa'adat and Marwan Barghouti were not included in it.

Behind the scenes of the Shalit deal 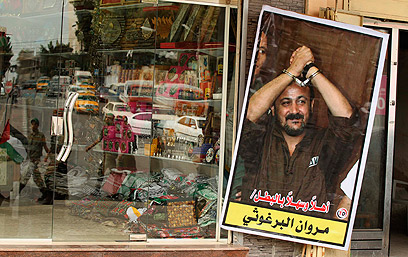 Hamdan also addressed the second stage of the deal which will see 550 prisoners chosen by Israel and Egypt released. "Egypt is the only party to guarantee the implementation of stage B conditions," he said. 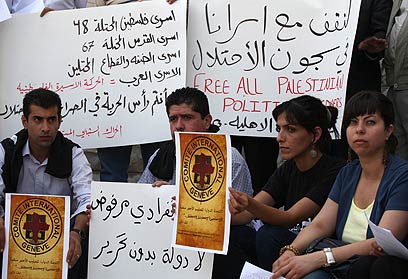 Supporting prisoners in Ramallah (Photo: AFP)
"According to the finalized conditions, prisoners of the second stage will be regarded as security prisoners rather than criminal inmates, they will come from all parts of the political spectrum and all areas. Their health state, prison sentenced and time served will all be taken into consideration."

On Friday, al-Hayat quoted a Palestinian source "in the know" as saying that Israel had asked Hamas to pledge not to abduct soldiers in the future but that the movement refused to meet the request. According to the report, Hamas decided to use any means to bring about the release of the remaining prisoners incarcerated in Israel. The source said he expected that the Gaza blockade will gradually be eased after the deal is completed.