IDF revenge: At least five terrorists were killed and 11 others were wounded Saturday after the Air Force struck an Islamic Jihad cell in the Gaza Strip Saturday, Palestinian sources said.

One of those killed in the attack is a senior commander in the al-Quds Bridages, the Islamic Jihad's military wing.

Opinion: The truth about Gaza Israel demands UN censure of Gaza rocket fire
Military officials said the killed terrorists were members of a cell that fired a Grad rocket at Israel earlier this week. The IDF and Shin Bet joined forces in the strike, which saw an Air Force aircraft firing at the terror cells, the army's spokesman said.

The cell was preparing to fire yet another rocket at the time it was hit, the IDF said. 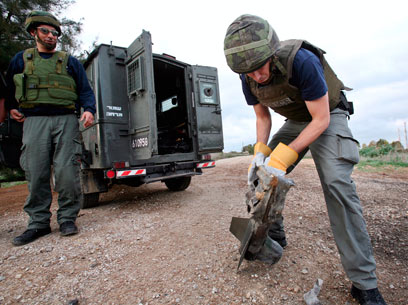 "The IDF will not tolerate any attempt to harm the State of Israel's citizens and will operate against any element that uses terror against Israel," the army said in a statement.

Islamic Jihad Spokesman Abu Ahmed said the IDF strike was the largest against the group since a lull was declared between Israel and Gaza factions. 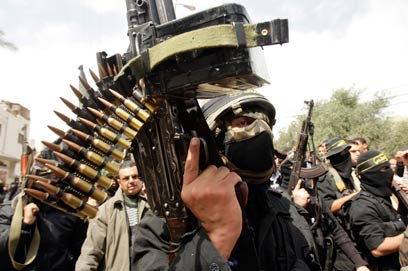 "Israel wishes to provoke the resistance – and it won't pass without a response. Israel shall pay a high price for its crimes," he said. "Today it was a great loss for us in the Islamic Jihad. The size of our retaliation will equal our loss."

Meanwhile, the group urged all its members to go on high alert ahead of the Islamic Jihad's response to Israel's strike.

The rocket that was fired from the Gaza Strip on Wednesday night landed in an open area in the Be'er Tuvia Regional Council between Ashdod and Gedera. According to medical officials, several people suffered shock.

A Color Red siren was heard in several communities including Ashdod, Kiryat Malachi, Rehovot, Ness Ziona and Gan Yavne, marking the first time the alert was activated so deep within Israel.

The explosion followed a Grad rocket that exploded earlier in an open area within the Be-er Tuvia Regional Council between Ashdod and Gedera was most likely fired from the northern Gaza Strip near the ruins of what was once the settlement of Dugit.

Elior Levy, Reuters, AP and AFP contributed to the story