US, Russia, UK back Israel at IAEA Mideast meeting

In a boost to Israel, Russia joined the US and Britain on Tuesday in backing the Jewish state's view that the Middle East cannot be turned into a nuclear arms-free zone without progress on regional peace.

The three nations – who are charged with registering new members to the Nuclear Nonproliferation Treaty – also blunted Arab efforts to get them involved creating such a zone, telling an International Atomic Energy Agency meeting in Vienna that was the sole responsibility of countries in the region.

The three-nation statement was made at a rare venue – a meeting bringing Israel and the Arab states together for a discussion of how to work toward establishing a Mideast nuclear-arms free zone. While nearly 100 nations attended the forum, it was primarily meant to allow those two opposing camps to exchange views on the issue – one of many dividing Israel from its Arab neighbors.

Organizers had warned against high expectations, and an official inside the closed two-day meeting said it ended Friday without bridging the differences.

Still the three-nation statement was significant. Russia is traditionally in the Arab corner and Moscow's decision to join Washington and London in the joint statement of support for Israel's view was a rare nod from Moscow recognizing Israel's security concerns. 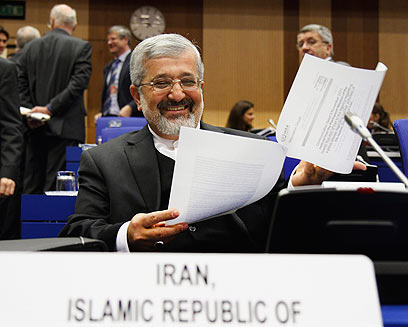 Iran's envoy to IAEA (Photo: AP)
"While Nuclear Weapon-Free zones improve the security of the entire international community, they do not exist in isolation from other security factors," said the statement to the closed meeting, which was shared with The Associated Press. Any such zone, it said must see "the states in the region united in their aspiration to provide for strengthened regional stability and security." That dovetails with Israel's view that peace must prevail in the Middle East before it can be made into a nuclear free zone. But it clashes with the Arab position that the two issues are separate.

The Arabs say Israel's undeclared nuclear arsenal represents the biggest threat to Mideast peace. But Israel says Iran is the greatest threat to the region through its refusal to heed UN Security Council resolutions demanding it stop activities that could be used to make nuclear weapons and suspected research and development of such capabilities. Tehran denies any interest in such arms.

Iran boycotted the meeting. But a decision last year by the 189 members of the Nuclear Nonproliferation treaty to convene a UN-sponsored conference on establishing a Middle East nuclear-free zone in 2012 was an incentive for Israel's Arab neighbors to come to the exploratory Vienna talks. 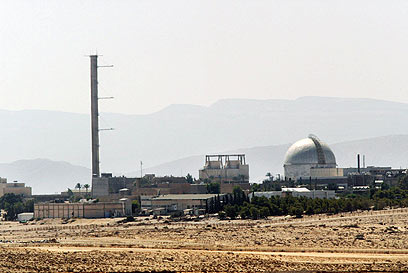 Dimona reactor (Photo: AFP)
Arab countries and Iran are aware of the potential of using the 2012 UN conference as a platform to pressure Israel to fulfill their long-standing demands: joining the nonproliferation treaty, acknowledging that it has nuclear weapons and allowing IAEA inspectors to probe its atomic activities. Israel is unlikely to do any of that. It remains unclear whether it will even attend the 2012 talks and is at the Vienna meeting only under the stipulation that it remain a nonbinding give-and-take on the issue of nuclear-free zones in general.

The three-nation statement also sought to put into context the value of the meeting – which featured presentations on nuclear-free zones elsewhere.

It said "zones free of nuclear weapons cannot be created counter to the will of the countries of the region by the efforts of extra-regional powers or international organizations." That was an rebuttal of an Arab push to get powers that are members of the Nonproliferation Treaty involved in creating a Mideast nuclear-free region. Participants said most speakers avoided polemics. But on Monday, Syria – among Israel's bitterest Mideast rivals – used the gathering to accuse Israel of posing a "grave and serious threat" through its undeclared atomic arsenal. Israel, for its part, restated its view: no discussions on a nuclear-free zone without peace in the Middle East. "Experience shows that such a process can only be launched when normal, peaceful relations exist in the region, when the threat perception of all regional members is low, and only after basic confidence is established among states of the region," David Danieli, Israel's deputy nuclear chief, said in comments provided to the AP.

For now, he said, "political instability, open hostilities, deep mistrust and noncompliance with international obligations are too common in many parts of the Middle East."