Iran called on the West to avoid a deepening diplomatic crisis following the storming of the British embassy in Tehran, saying it was an issue between Tehran and London alone, Iranian media reported on Saturday. Britain closed its embassy after Tuesday's incursion by hardline youths and expelled all Iranian diplomats from London. The fallout for Tehran spread when several other countries recalled their envoys, including France, Germany, Italy and the Netherlands.

"The British government is trying to extend to other European countries the problem between the two of us," Foreign Ministry spokesman Ramin Mehmanparast was reported as saying by the semi-official Fars news agency.

"But of course we have told European countries not to subject their ties with us to the kind of problems that existed between Iran and Britain." Western nations on Thursday significantly tightened sanctions against Iran, with the European Union expanding an Iranian blacklist and the US Senate passing a measure that could severely disrupt Iran's oil income.

Iranian diplomats expelled from London arrived home on Saturday to supporters bearing flowers and chanting "Death to England". "Spy embassy closed for good," read one of the many placards carried by the crowd of some 100 men and women, at Tehran's Mehrabad Airport, most of whom appeared to be members of the hardline Basij militia. 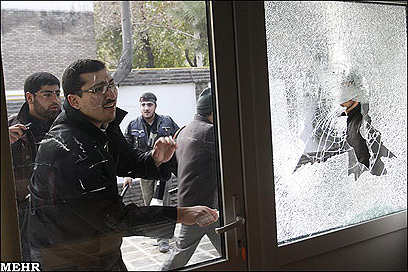 With swift condemnation from around the world, the embassy storming risks further isolating Iran, which is already under several rounds of sanctions.

The incident followed accusations from Washington of an Iranian plot to assassinate the Saudi ambassador and a report from the UN nuclear watchdog suggesting Iran was pursuing nuclear weapons. The United States and Israel have not ruled out military strikes if diplomacy fails to resolve the nuclear dispute. Some Israeli leaders have again started to contemplate the idea of military action to prevent Tehran from making bombs.   Mixed signals from Tehran over the attack have drawn attention to the deepening political rift within the Iranian leadership, a split created after Iran's disputed 2009 presidential vote. Iran's foreign ministry immediately apologised for the storming of the embassy, but some hardline rivals of President Mahmoud Ahmadinejad praised it, attributing it to a spontaneous outburst by hardline students in reaction to Britain's "historically hostile Iran policy." Supreme Leader Ayatollah Ali Khamenei, who has the last say on state matters, and Ahmadinejad have remained silent, a sign of the unease within the clerical establishment over the crisis. But in remarks reported on Saturday, Ahmadinejad said Iran would not yield to pressures. "We will stick to our revolution's principles and values with all our power even if the entire world rise up against us," he told a group of clerics, his official website President.ir reported. Hardline cleric Ahmad Khatami, one of four Tehran Friday prayer leaders appointed by Khamenei, condemned the embassy storming. "I say this explicitly, that I am opposed to attacks on and occupations of foreign embassies in the Islamic Republic," the students news agency ISNA on Saturday quoted Khatami as saying. "The attack by the students will lead to a feeling of insecurity among foreign diplomats in Iran," he said. The protesters stormed two British diplomatic compounds, smashing windows, setting fire to a car and burning the British flag in protest against new sanctions imposed by London. Analysts say the closure of the embassies, by cutting off the channel of communication, will complicate finding a diplomatic solution to the nuclear dispute. "The end of talks with major powers means confrontation and military strikes against Iran. This scenario scares the Iranian regime," said one analyst, who asked not to be named. Analysts say Iranian authorities are concerned about a military strike against their nuclear facilities as well as a revival of anti-government street protests that followed the 2009 vote, which the opposition says was rigged to secure Ahmadinejad's re-election. "Sanctions are hurting the people and might force them to take to streets to vent their anger over the economy," said analyst Hamid Farahvashi.

"Some Iranian hawks favour a military strike that will reinforce their strength ... But wiser rulers want to preserve the system through an easing of the tension."