Syria says revolt over, army to pull out gradually

Syria declared Saturday that the year-long revolt to topple President Bashar Assad is now over, but it will keep its forces in cities to "maintain security" until it is safe to withdraw in keeping with a UN-backed peace deal.

The army kept up an offensive against opposition strongholds on Saturday, pummeling the Khalidiya district of Homs city; but despite the violence, Damascus says it has the upper hand.

"Our goal now is to ensure stability and create a perspective for reform and development in Syria while preventing others from sabotaging the path of reform."

His assertion follows army victories over rebel strongholds in the cities of Hama, Homs and Idlib, and Assad's acceptance this week of Annan's plan that does not demand he step down.

Calls by Gulf Arab states to arm the rebels have fizzled. The political opposition remains divided, and prospects of Western-led military intervention are close to zero. 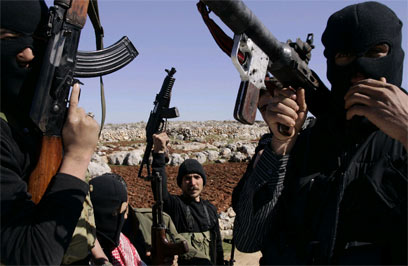 Assad has endorsed Annan's six-point peace plan, which has the UN Security Council's unanimous backing, but Western leaders say the 46-year-old Syrian leader has broken similar promises before and must be judged by actions not words.

Assad's opponents have not yet formally accepted the plan.

They were due to meet the foreign ministers of allied Western powers, including US Secretary of Sate Hillary Clinton, on Sunday at a "Friends of Syria" conference in Turkey, which provides a safe haven for Syrian rebels.

Makdissi said Annan, who had talks with Assad in Damascus on March 10, had acknowledged the government's right to respond to armed violence during the ceasefire phase of the peace plan.

He said Syria's conditions for agreeing to Annan's plan included recognition of its sovereignty and right to security.

"When security can be maintained for civilians, the army will leave, he said. "This is a Syrian matter."

However, Annan's plan says Syria must stop putting troops into cities forthwith and begin taking them out. "As these actions are being taken on the ground, the Syrian government should work with the envoy to bring about a sustained cessation of armed violence in all its forms by all parties with an effective United Nations supervision mechanism," it says.

The UN peacekeeping department will send a team to Damascus soon to begin planning for a possible ceasefire observer mission, Western diplomats said on Thursday, adding that it was unclear the 200 to 250 monitors envisaged would ever be deployed. "We are very far from a peace to keep," one said.

Western diplomats say the key to the implementation of Annan's ceasefire – the main thrust of the deal – lies in the sequencing of the army pullback and ending rebel armed attacks.

They say the Opposition will not feel safe negotiating before the army halts its offensive, but also note it would be impractical to expect a complete government pullout before the rebels are obliged to respond.

"Betting on military efforts to topple the regime is a losing gamble and the burden is too great: more bloodshed and loss of life and property, to no avail," he added.