The White House released photos showing Obama, his wife Michelle and the other guests dinning together to mark the Jewish holiday. 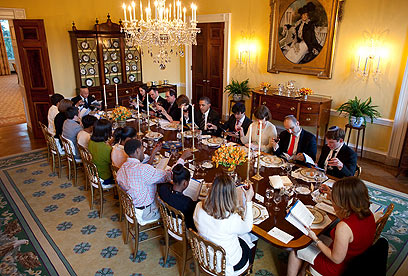 Passover at the White House

On Thursday, Obama offered Passover greetings to Jews in America and worldwide via video.

"The story of the Exodus is thousands of years old, but it remains as relevant as ever, "the president said in the message. Throughout our history, there are those who have targeted the Jewish people for harm – a fact we were so painfully reminded of just a few weeks ago in Toulouse. Just as throughout history, there have been those who have sought to oppress others because of their faith, ethnicity or color of their skin."

The president added that "throughout the years, the search for answers has deepened the Jewish people’s commitment to repairing the world, and inspired American Jews to help make our union more perfect. And the story of that first Exodus has also inspired those who are not Jewish with common hopes, and a common sense of obligation."