The court's decision effectively allows the government to deport some 1,500 South Sudanese migrants back to their home country.

Under the "collective protection" policy, which was instated by Yishai a few years ago, foreign migrants were not expelled, but their eligibility for refugee status was not checked either. Israel became a signatory to the Refugee Convention in 1954.

In early 2012 Yishai announced his decision to lift the policy and deport South Sudanese migrants who do not leave the country voluntary by the end of March.

The petitioners' argument was concern for the safety and well-being of the deportees and the claim that the current situation in South Sudan is neither safe nor stable.

In response to the motion, the court issued a temporary injunction that prevented the migrants' deportation until the State issued its response. About two months later, the State said that a thorough assessment of the situation in South Sudan – which included visits by top officials to the new African country – determined that most of the instability is in the northern border region. 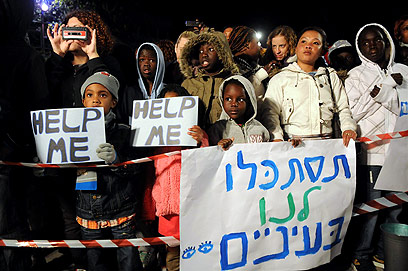 The petitioners failed to prove that the deportees would face "risk to life or exposure to serious damage," the court said, finding in favor of assessments by Israeli diplomats in South Sudan, which declared independence last year after decades of fighting with northern neighbor Sudan.

The bulk of some 60,000 Africans who have crossed into Israel through its porous desert border with Egypt are from Sudan, an overwhelmingly Muslim nation that does not recognize the Jewish state, and from war-ravaged Eritrea.

The rightist government of Prime Minister Benjamin Netanyahu sees in the migrants a big economic and demographic threat to Israel's already ethnically strained population of 7.8 million.

But while Israel says the vast majority of them came illegally to work, humanitarian agencies argue many of the Africans should be considered as refugees with asylum rights.

While the Jerusalem court case was heard, Minister Yishai said he had ordered immigration inspectors to start detaining the South Sudanese and prepare their deportation.

A ministry spokeswoman, Sabine Haddad, said on Thursday that there had been no round-ups yet, but that the 1,500 migrants would now be "processed" for deportation "in the near future."

Another official said Israel had assigned 11 clerks to vet any refugee claims, many of which could be complicated by some applicants' lack of documentation. The official predicted that processing of the South Sudanese would take several weeks.

Israel Radio quoted Yishai, who heads the Shas party, as saying he hoped Thursday's ruling would be "the first in a series of measures that would allow for the deportation of all citizens of Eritrea and north Sudan.

"Until all the (African migrants) are deported, I will stick to my plan to build a tent city and additional detention facilities to house all the infiltrators, so they do not settle in Israel's cities. This is not about a war against the infiltrators, but a war to preserve the Zionist Jewish dream in the Land of Israel," he said.

But an official briefed on Israel's planning said the government was "in no position to deport all of these people. Eritrea and Sudan are completely different situations."