It is mistaken to analyze the murder of American diplomats in Libya and the anti-Western riots in the Arab world as current events only. From a strategic perspective, they are part of the huge clash of cultures between the West and large segments of the Islamic world. The present anti-American disturbances are unlikely to be a major element in any future recorded history of this conflict.

Violent components of this confrontation in the post World War Two period have been around for over 30 years. One could consider its 'official' beginning in 1979 when Iranians took the staff of the American embassy in Tehran hostage. That was followed by the burning of American embassies in Pakistan and Libya.

Prophet Cartoons
What about brotherhood? France and Mohammed
Dr. Yaron Friedman
Op-ed: Publication of anti-Islam caricatures violates one of French Revolution's principles
What about brotherhood? France and Mohammed
The development of this culture clash is difficult to analyze because many components are intertwined with other issues. The Allied war in Afghanistan is mainly against radical elements in the Islamic world. The war in Iraq was much less so. During the first Gulf War, the American Army came to rescue Muslim countries from Iraq’s aggression. The multiple recent inter-Muslim killings are not part of this clash of cultures. Other violent components of the confrontation of cultures are attacks against Western targets by Muslim terrorists. They are less lethal than wars, but unambiguous in nature. The terrorists of 9/11, as well as the perpetrators of the bombings in Madrid (2004) and London (2005) were acting out their vision of Islam. Though their worldview is a minority one, it is far from marginal. There are at least one hundred million Muslims in the world who largely share al-Qaeda’s violent vision of Islam, even if only a limited number of these are willing to commit murders themselves. Beyond that, there are many others who believe Islam should dominate the world. The current riots have much in common with the 2006 Danish Mohammed-cartoon inspired disturbances. There also a widespread reaction in the Islamic world took place against an act by a minor player in one location of the Western world. An estimated 200 people were killed in the cartoon rioting. Most of the dead however, were Muslims. The others were Christians, none of whom were Westerners. The persecution and murder of Christians in Muslim lands also belongs in a broader frame of the culture conflict. It is a fight against this major religion of the West, even if those attacked are not Westerners. 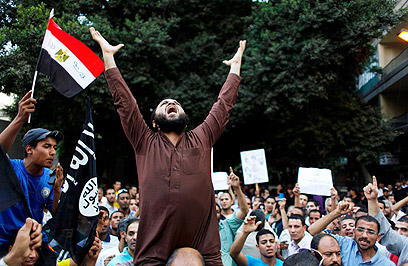 There are also many non-violent elements of the clash of cultures. Some of the Muslim immigrants in Western countries undermine and incite against democracy. Others aim to create a local culture for their community, which is at major odds with democracy. The intimidation and abuse of many Muslim women are clear examples of this. One can see this particularly well in Muslim ghettos in France and Sweden for instance. The documentary Allah-Islam on Israel’s Channel 10 illustrates this well.

The perspective on the conflict of cultures is further obfuscated by political attitudes in the West. The multiple fallacies in President Obama’s 2009 speech to the Muslim world in Cairo are examples of this. More important is multiculturalism. It structurally confuses Western visions of the current culture of the world of Islam. Suggesting that all cultures are equal means disregarding major criminality in the Muslim world, including in various national revolts which might be termed 'the Arab fall' or 'winter.' Pointing out that while Western culture is problematic, contemporary Islamic culture is inferior to it, is highly politically incorrect. Yet Western Muslims in particular should be interested in having this truth be told. If the two cultures were equal, the West could theoretically act toward Muslims in their countries like many Muslim countries behaved toward their Jews in the decades after the Second World War. If the West acted in a similar way, it could restrict civil rights and confiscate the Muslims' passports and belongings. Thereafter, it could force them out. If the West followed the 1967 Libyan acts against Jews they could even kill some. Where do Israel and the Jews fit into all of this? The Muslim world's fight against them is in part separate from this clash of cultures and in part belongs to it. An example of the latter happened this year in France when the Muslim of Algerian origin Mohammed Merah killed both soldiers and Jews. The intimidation of Jews mainly by young Muslims in the West, leads to Jews hiding their identity in the public sphere of many European cities by not donning a skullcap for instance. This clash will not necessarily result in a major explosion. It may lead largely to increasing chaos without a total frontal confrontation between the Western and Islamic worlds. The ongoing clash of cultures gets far too little attention. This also means that mutations in the two worlds are often analyzed without linking them to this confrontation. That is indeed a major mistake. Manfred Gerstenfeld is a member of the board of the Jerusalem Center for Public Affairs, of which he has been chairman for 12 years