After blanks fired at synagogue near Paris, French president pledges to battle anti-Semitism 'with the greatest firmness.' Jewish leader warns against complacency before 'monstrous ideology' of radical Islamists

PARIS - France is boosting security at Jewish and other religious sites after blanks were fired at a synagogue west of Paris amid renewed concerns about anti-Semitism around the country.

President Francois Hollande sought Sunday to allay tensions between Jews and Muslims aggravated by a series of violent incidents in recent months. Leading the country with western Europe's largest Jewish and Muslim communities, Hollande singled out hateful extremists for criticism and urged respect for all religions in a country that is officially secular.

He said that authorities "in the coming days, in the coming hours" will increase security at religious sites so they won't be subject to the kind of attack that targeted a synagogue in the Paris suburb of Argenteuil on Saturday night.

A synagogue representative said witnesses heard what sounded like a weapon being fired and that police said blanks had been fired and empty bullet casings found. Local police would not comment on the incident to the AP. Services were canceled at the synagogue Saturday night because of the incident, the representative said, speaking on condition of anonymity because a police investigation is under way.

The firing came hours after police carried out raids across France on Saturday targeting a suspected jihadist cell of young Frenchmen recently converted to Islam accused of links to a grenade attack on a kosher grocery store last month. DNA on the grenade led them to a member of the cell, who was killed by police after he opened fire on them. 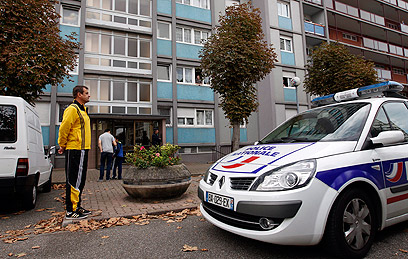 Officials said the man had been under surveillance since last spring — around the time a French Islamist radical went on a shooting rampage against a Jewish school in Toulouse and French soldiers, killing seven people.

Hollande said authorities expected the jihadist cell was ready to strike again in the coming weeks.

He met Sunday with leaders of the country's Jewish community and pledged to fight extremism and anti-Semitism "with the greatest firmness."

Richard Prasquir, the president of France's leading Jewish group, CRIF, warned French authorities against complacency before what he called the "monstrous ideology" of radical Islamists. He said he has been worried about the security of France's Jewish community since the killings in Toulouse.

On Saturday unknown assailants fired blanks at a synagogue in the Paris suburb of Argenteuil, and French police exposed a terror cell during raids linked to the grenade attack on a Jewish market. The Toulouse attacks in March shook the country and prompted heightened security at Jewish schools and synagogues around France. They also inspired a new counter-terrorism law currently in the works.

Hollande said authorities should show "intransigence" toward racism and anti-Semitism. "Nothing will be tolerated, nothing should happen. Any act, any remark will be prosecuted with the greatest firmness."

Hollande also spoke Sunday with Mohammed Moussaoui, head of an umbrella group of Muslim organizations called CFCM, and assured him that French officialdom would not stigmatize all Muslims for the acts committed by a radical fringe.

The CFCM denounced the synagogue attack, saying in a statement Sunday that it "assures the French Jewish community of its support and fraternal solidarity in the face of all attacks that target its members and institutions."

Last month's firebombing of the grocery in the Paris suburb of Sarcelles happened on Sept. 19, the same day a French satirical paper published crude caricatures of the Prophet Mohammed. Anti-Western protests were also growing at the time against an anti-Islam film. One person was slightly injured, but the attack with a Yugoslav grenade came after a summer of what residents called growing anti-Semitic threats.