The 'write' choice for president

This presidential election the stakes seem higher, the choices more stark and diverse while the rhetoric is flying and flogging. So whom to vote for? Therefore, it behooves the voter to garner a true impression of the personality of Mitt Romney and Barack Obama. The very best way is via the science of graphology — handwriting analysis, which presents a precise picture of the writer's personality, psychological

Both candidates exude confidence, self-sufficiency, and deeply want to achieve a prominent place in public life. Each has an abundance of stamina and vitality, a penetrating, fast mind and is an intuitive thinker who sizes up a situation and grasps facts instantly; vivid and rapid comprehension. Yet they are both relatively narrow-minded and prejudiced against new ideas. Both are guided by strong religious principles and do not have a natural predilection to prevaricate. 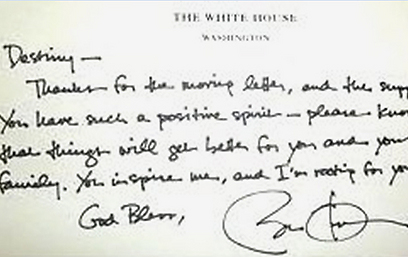 President Barack Obama exudes grace, fluidity, charisma, charm, wit and needs to always be the center of attention; needing an audience to play to. He has a quick, facile mind, a philosophical bend and quick sense of humor. He uses his keen mind to his advantage, constantly thinking in a creative and innovative manner. It is a brilliant mind that is determined to show off its cleverness. He has mental clarity, a sense of order, plans ahead well, and organizes time and life effectively. He is quick and decisive and takes a direct route to solve problems. His quick intellect makes easy mental connections and is resourceful when it comes to dealing with problems

He appears good natured, is very intuitive, easy going, with a seemingly informal style, preferring to get right to the point. While appearing affable and adaptable, something in his mind has him wary of acting naturally, consequently he covers his fear with an extra veneer of congeniality. The long final strokes at the end of each line is a holding-off gesture, like putting out a stiff hand to keep people at ‘arm’s length’ as he does not fully trust others and doesn’t truly want them to get too close to hurt him. Though he is even-tempered, with a genuine, cheerful demeanor, this can instantly vanish into impatience and irritability He rarely allows himself or others any slack, and his attitude can wax inflexible. He reasons well, has strong self-discipline and will power and is highly conscious of his appearance. He carefully grooms and massages every word and gesture for maximum effect. He can bide his time and wait for the right opportunity. Once he’s decided on a goal, nothing will stop him from reaching it. However, he has a tendency toward procrastination, and after he achieves his goals, tends to rest on his laurels.

His tremendous powers of concentration accompany poor detail orientation, so his message can sound fuzzy under scrutiny. He is adaptable and versatile, with abundant self-confidence and energy. He can be extremely dominating which defends a sensitive temperament and delicate feelings, and is open to influence, easily manipulated and, under pressure, can lose objectivity.

He bristles with self aggrandizement, comes on strong, as he is pleased with himself and wants others to know it, and can exaggerate his accomplishments to anyone who will listen whether it is based on reality or not. He doesn’t need the approbation of others to feel successful.
Final Debate
Romney's small victory
Yitzhak Benhorin
Op-ed: Republican candidate succeeded in getting through final debate without making any major mistakes
Romney's small victory
He is remarkably loyal, has a well-worn maturity, a strict, and a demanding and overly active super ego, and an exceptional ability to get his needs met in a socially acceptable way. His emotions are kept under strict control at all times and behavior restrained. His creativity and originality are freely expressed, as is his literary talent. He is very gifted with is hands, with an artistic flair. Note the florid signature. By nature, he is secretive and does not reveal all his plans. He greatly enjoys the good things in life. Throughout life, he attempts to overcompensate for an absent father and an overbearing mother and grandmother. He dislikes friction, likes to feel secure and avoid unpleasantness if threatened in any way. He has an amazing fantasy life, needs to put on airs much like a rooster puffing himself up, and sometimes common sense succumbs to imagination. He has an eye for the finer things in life, physically and materially. He is vulnerable to the strong drives of others, harbors libidinal frustration which informs much of his thoughts and new adventures to try with his lover. He is deeply, emotionally involved and his pent-up energy is released physically The huge difference between the signature and the handwriting indicates a powerful and dominant need for him to project a highly embellished image. The encircling indicates a need for self-protection and hiding information about himself from prying eyes. The particular graphics in his signature hint at symbolism both religious and tribal, assuming the role of a veritable coat of arms. The signature is well balanced, looking as if it could have begun on the right or left side. 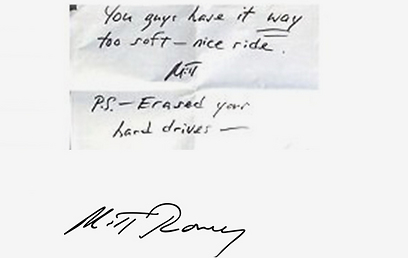 Governor Mitt Romney is sociable and affectionate, yet he is more mentally than socially oriented and more comfortable in the theoretical world than in the company of others. Although he may have plenty of friendships, it isn’t quite easy for him to connect with others.

He carefully considers things before starting anything new. He is a clear thinker who likes to step back to pause for reflection before assimilating an event or an idea. He is very intuitive, and an excellent negotiator, which leads to his showing consideration to others and taking the time to see that his listeners understand him. In his eagerness to attempt to explain himself, his words can fly away without adequate judgment He operates with forceful dynamism and productivity, a great deal of determination and endurance, and rarely will drop the ball or do something halfway. A vitality and strength underlie everything he says or does. He is fueled with good will-power, dynamic will, firmness and quality of activity and independence. He is self-confident and feels good about himself and is independent enough to assert himself when the situation calls for it. He shares his opinions and viewpoints with others and is not afraid to allow other opinions to be aired and debated. Nevertheless, he tends to be set in his ways and may be averse to change things he considers unnecessary. He has pride and ambition and believes in his ability to accomplish what he sets out to do. He can be counted on to pursue his goals with extreme persistence; there is no doubt he will follow through on what he starts out to accomplish. When faced with unexpected events, he will not be distracted and finds ways around obstacles and getting back on track. He leaps nimbly from thought to thought, without wasting time and necessitating all the data before him. He operates with great efficiency, opting for a directness of approach, albeit with a certain attitude of calculation 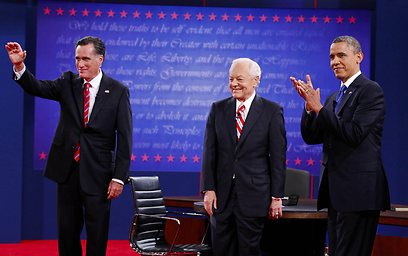 He is a realistic, practical and independent thinker, with a controlled but inquiring mind that thrives on facts. He must have concrete data and deeply distrusts mental embroidery and subjective thinkers. He prefers to eliminate unnecessary details when making decisions. His preference is to act rather than react.

He is generally calm and emotionally steady, well-balanced, responsible and knows how to express his emotions when appropriate and hold back when its not. He uses restraint and doesn’t get carried away with his feelings. He employs good common sense. He may be charming and sophisticated but is also reserved and keeps his distance. He is not someone you could run up to and plant a hug or kiss in public. He is not easy to get to know and his social circle is relegated to a chosen few. Though he may try to conceal it, he has strong and deeply felt feelings; a depth of emotion and aggressive spirit. These experiences well up from his toes up and anguish emanates directly from the heart. Memory impression leave deep tracings on his psyche and feelings are rather enduring. He may forgive a wrongdoing or injustice but will never forget it; he doesn’t carry a grudge. He sometimes can be forced into a posture of defensiveness. He is an outdoors person, releasing pent up energy through exercise and sports. His innate desire is not physical or material gratification but a passion for life, family, travel and the challenge of adventure. He is informed and mobilized by an almost metaphysical spirit of rootedness. He has no need to coast on his parent’s reputation - which is rich in political accomplishment - but he does pay tribute to them and feels fortunate to be able to link his lot to theirs. His signature is essentially similar to his handwriting, attesting to his being at peace with himself. He does not want to appear what he is not, nor does he want to be conspicuous. He is sincere and stable and faces the world with equanimity. What you see is what you get. The over arching crossing bar on the T is an indication of a personality that feels naturally protective of others.

This analysis is gleaned solely from the handwritings of the candidates.

Dr. Ari Korenblit is a graphologist/handwriting analyst and Supreme Court certified document examiner. He is also a licensed psychotherapist and marriage counselor. He is available for lectures, teaches graphology and analyzes handwriting for personnel selection, personality assessment, forgeries, etc. Dr.Arikorenblit@gmail.com