Analysis: As Assad regime grows more desperate, prospects for provocative attack against Israel will only increase

"This is a Syrian matter which may turn into an Israeli matter." So noted IDF Chief of Staff Benny Gantz near the site where three of Assad’s tanks had penetrated the UN-designated demilitarized zone on the Golan Heights one day prior. Gantz’s prophecy wasn’t bluster, but rather a rare public admittance of what Israeli leaders have long feared: Israel will inevitably join its Arab neighbors in becoming embroiled in the Syrian civil war.

Saturday’s incursion didn’t violate Israel’s sovereignty, but nonetheless constituted a violation of the countries’ long-standing ceasefire agreement, putting IDF command centers across northern Israel on high alert. Thus far, of the five nations bordering Syria (Iraq, Israel, Jordan, Lebanon, Turkey), Israel has emerged relatively unscathed from the Syrian conflict, despite its perpetual state of war with Syria which has spanned six decades.
Lebanon Hit
Assad proves he's still here
Yaron Friedman
Analysis: Assassination of top Lebanese intel officer possible Syrian warning to those who support rebels
Assad proves he's still here
Despite the relative calm, the conflict in Syria has since forced Israel to contend with a variety of scenarios, including absorbing Syria’s fleeing minorities and the prospect of Sunni extremists filling the vacuum in the wake Assad’s ousting. While the IDF has gained experience in dealing with the above scenarios from the situation along Israel’s southern borders, its leadership is now faced with the far more disheartening prospect that Assad may purposefully lure the IDF into his conflict.

As Gantz and his staff have surely observed, the Assad regime has successfully engaged in a cynical campaign to destabilize its neighbors in the hopes of deterring them from supporting the Syrian opposition. In August 2012, the Syrian military withdrew from Kurdish-populated areas of northeastern Syria, allowing Kurdish militants to take control over large swathes of territory near the Turkish border.

The withdrawal forced Turkey to reconsider its lead role in supporting the Syrian rebels, diverting Ankara’s attention to the prospects of its own Kurdish separatists using Syria as a staging ground for attacks. Indeed, soon after a deadly bombing hit the southern Turkish town of Gaziantep, Erdogan’s drums of intervention in Syria had taken a distinctly Kurdish tone, rather than a humanitarian one. In September, Assad further tested Turkey’s resolve when his forces were blamed for a deadly cross-border mortar attack in Turkish territory, resulting in a considerably restrained Turkish response. 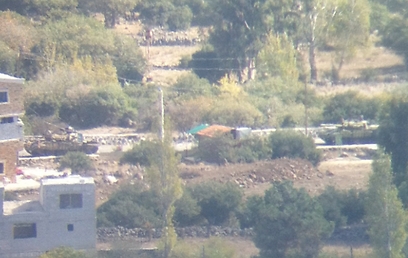 In Lebanon and Jordan, meanwhile, Assad has been accused of sending agents to carry out destabilizing terror attacks, while sending thousands of refugees across their borders. In August 2012, Lebanese Internal Security Forces (ISF) arrested former MP Michel Samaha on charges that the Assad regime had dispatched him to orchestrate attacks in Lebanon to collapse the country’s delicate sectarian balance. Heading up the investigation was Maj. Gen. Wissam Hassan, the target of a deadly car bombing in Beirut two months later.

Unlike Turkey and Lebanon, Israel has largely kept its nose out of internal Syrian affairs largely over fears of de-legitimizing the opposition. As such, Israel needs no deterring, but instead serves the Assad regime as a function with which to threaten the West as its last resort. Should it choose, the regime has a number of options from which to provoke the Israeli military, all of which allow Assad the benefit of plausible deniability.

Following a rebel advance on Damascus in July 2012, Assad withdrew a division dedicated to patrolling the Israeli border from the Golan Heights. Like in the Kurdish northeast, the withdrawal turned the area into a virulent no-man’s land where Sunni rebels and (seemingly) rogue commanders would be free to fire into Israeli communities or commit other attacks.

As the Assad regime grows increasingly desperate, the prospects for a provocative attack against Israel will only increase, leading to a widely-feared regional escalation. Hezbollah chief Hassan Nasrallah has already threatened that Israeli intervention in Syria would cause his militia to unleash some 70,000 rockets currently pointed at the Jewish State.

It's a scenario the Israelis have planned for since it had become evident in July that military intervention could be necessary to stop Assad’s chemical weapons from being transferred to extremist groups, including Hezbollah.

Meanwhile, the IDF Home Front Command has spent the last few months drilling mass casualty rocket attacks across Israel's Northern District to the point of exhaustion, while the IDF has replaced its reservist units on the Golan Heights with far more capable draft units.

There should be little doubt in anyone’s mind that fresh plans for military intervention aren't sitting on Gantz’s desk in Tel Aviv’s Kiyra military complex. Nowhere in those plans are options for restraint in the face of a mass-casualty border attack like that which occurred in Turkey, or pledges for neutrality like those made following Beirut’s deadly car bombing. The term “powder keg” would be the fitting term to describe the situation had it not become such a cliché in the Middle East.

The author is a senior analyst and intelligence manager at Max Security Solutions, a geopolitical risk consulting firm based in Tel Aviv, Israel. You can follow him on Twitter @Dannynis