As it happens with art works, to analyze history it is sometimes necessary to take a step back and admire the complexity of a situation with an eye which isn’t focused only on small and immediate details. When doing so about the almost century old cycle of violence between Arabs and Jews, in modern-day Israel and the Palestinian territories, it is necessary to go back to the wording used in the Balfour Declaration.

During the British Mandate over Palestine, the document conveyed the clear support for the establishment of a Jewish national home – a Jewish state – while the ‘civil and religious’ rights of Arab communities should not be endangered. This structuring document did not state that a two–state solution was to be considered the effective result of the process. Nevertheless since the Peel Commission and the UN Partition Plan the division of former British-controlled Palestine into a Jewish state and an Arab state has become the only an effective accepted solution and a base for diplomatic negotiations.

On the other hand, Arab powers are engaged in a major campaign aimed at empowering the Hamas terrorist movement, thus considerably shifting the power balance and putting a tangible end to the idea of a single state for the Palestinians.

In this situation, it may be time to start advocating for a three–state option, which would effectively see Palestinian populations ruled by two separate governments: a state in Gaza and one in Judea and Samaria. The first reason for such an approach may be found in the increasingly contradictory statements issued by Hamas and the Palestinian Authority. On the one hand, Mahmoud Abbas has virtually crossed the line of the decade old taboo regarding the right of return. With his emblematic statement ("I visited Safed before once (…) but I want to see Safed. It's my right to see it, but not to live there") he opened a Pandora's Box but also expressed a rare sense of pragmatism which may, to some extent, be found useful in the future negotiations. On the other hand, Hamas Prime Minister Ismail Haniyeh forcefully criticized Abbas and reiterated Hamas’ credo over “not giving up an inch of Palestine.” While the PA president is still dedicated to a counterproductive and non-negotiated UN recognition of Palestinian statehood, his acknowledgement of the unsustainability over the right of return and the need to limit violence may be the bases for future agreements. On the opposite, Hamas maintains a resiliency to achieve the annihilation of the Jewish State, a will to carry out terrorist rocket attacks and an increased appetite for international recognition. As the two governing Palestinian factions have basically few common grounds in regard of Israel, it may be in Israelis’ and Palestinians’ interests to approach the situation through a three–state option, where the fundamental oppositions between Hamas and the Palestinian Authority would no longer be an obstacle, as Israel would be able to have an official two-tiered approach. 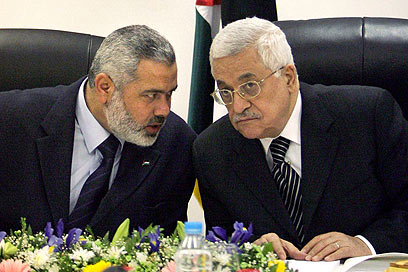 The second reason pressing for a three–state approach is to be found in the current push by Arab powers to legitimize Hamas and thus shut down the basis for two–state negotiations.

Arguably one of the most powerful men in modern Arab political affairs, Sheikh Hamad bin Khalifa Al Thani personally broke the politico-economic blockade in place over Gaza. His meeting with Haniyeh, along with the $400 billion he brought with him, is the first event of this kind since the Islamist movement gained power in 2005. The official visit of an Arab head of state in Gaza should be considered as a trigger of a developing inclination which will likely alter the Israeli-Palestinian equation. The visit has to be read as a strong political statement. If Arab states are not directly dropping Abbas' policy and his unfortunate UN adventure, Qatar is stressing a tendency slowly undermining the PA president’s role as the solely legitimate international interlocutor. This comes as a response to Abbas' inability to deliver a strong and coherent policy guaranteeing the advancement of Arab interests.

With his meeting with Haniyeh, Sheikh Al Thani is marking a direct rupture with previous policies, led by King Abdullah's Arab Peace Initiative (API). The 2002 plan was in fact a first move by Arab states to theoretically recognize the possibility of a two–state solution to the Israeli-Palestinian conflict. Provided that the API has never truly been engaged as a starting base for operative negotiations between the Jewish state and the Palestinian Authority, it nevertheless left space to a full Arab recognition of Israel.

By holding direct talks with Hamas aimed at empowering the terrorist movement and providing it with increased legitimacy, Qatar is actively participating in the disintegration of an already complex two–state solution.

Since Hamas maintains in its charter the call for the destruction of Israel and gains a major slice of its credibility by being perceived as a main actor in the so-called 'resistance' bloc, any compromise on its position toward the Jewish state is highly unlikely especially if receiving the backing of a regional superpower. Along with Qatar, Sheikh Al Khalifa, Bahrain’s ruler, is rumored to prepare his own trip to the Gaza Strip. This would in fact echo an implicit blessing of the Saudi royal family in regards of a new policy aimed at effectively fracturing the Arab-Palestinian relations. In addition to these diplomatic shifts, Prince Hasan Bin Talal of Jordan has stated at the beginning of the month of October that the West Bank is historically linked to the Hashemite Kingdom, thus opening the road again to the integration of these territories to Jordan. For this, the reality on the ground tends to further diminish the credibility of talks about peace centered around a comprehensive solution based on mutual recognition and agreed land swaps, the core elements of a two–state solution. In fact, the reintroduction by Arab states of Hamas as a legitimate actor in the Israeli-Palestinian conflict may indicate their covert unwillingness to fully adhere to the two decades old bases for conflict-resolution negotiations. This situation may nevertheless provide a two-tiered window of opportunity for Israel.

Hamas has been receiving a vast majority of its weapons by its sponsors, Syria and Iran. With a major role played by US-backed Qatar and Saudi Arabia, the Islamist movement may have a more difficult time obtaining top grade rockets and anti-tank weaponry due to the US oversight over the Gulf monarchies. Along with that, the Jewish state may likely exploit this diplomatic dichotomy over the Palestinian issue to attempt in negotiating a separated peace with an embattled Abbas.

As the PA leader has been rebuked by recent elections in the West Bank and is sidelined by major Arab players, a push by the Israeli government for enhanced negotiations over a settlement of issues between Israel and the West Bank may lead to a much needed new design in peace talks.

By empowering Hamas, Al Thani may be successful in terminating the two–state solution while providing to the Jewish state the possibility to have a multi-faceted approach toward peace negotiations, directly separating the talks with the West Bank from the ones with Gaza, effectively opening the road to a three–state solution. Palestinian statehood in Judea and Samaria would be possible through mutual recognition and far reaching security agreements. Such a deal should no longer be attached to the situation in the Hamas-ruled Gaza strip.

Riccardo Dugulin holds a Master degree from the Paris School of International Affairs (Sciences Po) and is specialized in International Security. He is currently working in Paris for a Medical and Security Assistance company. He has worked for a number of leading think tanks in Washington DC, Dubai and Beirut. Personal website: www.riccardodugulin.com