Op-ed: Where was international community when thousands of rockets were fired at south before Gaza operation?

With a ceasefire in place, it seems appropriate to provide a perspective on the events.

From January until mid-November Gaza terrorists fired over 1,100 rockets at Israel. In Sderot when sirens sound residents have a mere 15 seconds to reach a bomb shelter. Schools have been closed, as have businesses. Up to one million Israelis have been forced to spend nights in bomb shelters. Parents cannot afford to deal with their own fears, as they must comfort their traumatized children. This is how daily life has been for the past decade in Ashdod, Beersheva, Ashkelon, Sderot and other cities.

Israel-Hamas Conflict
How to break the cycle
Avraham Sela, Oren Barak
Op-ed: What Israel needs is not a military victory over Hamas but to quickly turn its non-state Palestinian rival into a stable state
How to break the cycle
Altogether during this period approximately 12,000 rockets (an average of three per day) have been fired at Israel from Gaza.

With all these rockets fired at Israel, while no 'official conflict' was taking place, why didn't the international community take action? Why didn't the United States pressure Egypt, since the smuggling tunnels originate there? Where was Europe, or the UN?

If this was happening anywhere else in the civilized world I submit efforts would have been made to reign in the perpetrators before all out hostilities erupted. However, when it comes to Israel, it seems a different standard is applied. Unreasonable becomes reasonable, and unacceptable becomes acceptable.

After informing the terrorists numerous times there would be consequences if they didn't stop the attacks, Israel finally acted on November 14. Instead of intentionally firing rockets at civilians, Israel took out two legitimate military targets - Hamas Military Chief Ahmed Jabari and his son. They were killed when their car was destroyed in a surgical strike. No one else died. Jabari's record included being commander of the attack which resulted in the kidnapping of Israeli soldier Gilad Shalit.

In contrast to their enemy, the IDF takes extraordinary measures to avoid hurting civilians, such as making thousands of phone calls and dropping scores of leaflets letting them know in advance to avoid being near rocket launching sites. Hamas intentionally places them in civilian neighborhoods to maximize the possibility of civilian deaths so they can vilify Israel. Has Hamas ever provided advance warnings of impending rocket fire? Never, because it is their goal to murder civilians.

No other army in history has taken such measures as the IDF. In spite of these unprecedented efforts, this has done little to endear Israel in the international community. 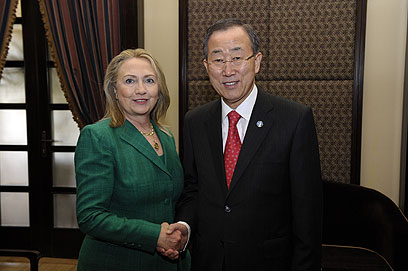 Clinton and Ban in Israel to promote truce (Photo: AFP)

During Operation Pillar of Defense approximately 1,500 rockets and mortars were fired on Israel. Tel Aviv and Jerusalem also came under fire. A Tel Aviv bus was bombed, injuring 27 people, bringing back painful memories of when such terror attacks happened frequently.

My question is why only after Israel takes out legitimate military targets do we hear outcries from the international community to stop the violence?

What's wrong with this picture?

Never has such a tiny country, with so few people been the focus of such worldwide attention. Why is this? In a word- it's Israel, the home of the most discriminated people in history, the Jews.

The World Council of Churches, an umbrella organization of over 500,000,000 Christians has published several harsh anti-Israel documents. They vilify Israel at conferences such as Christ at the Checkpoint, and are decidedly pro-Palestinian. The PLO, Fatah and Hamas have charters requiring the destruction of Israel and annihilation of the Jews. Then there are liberals who proudly champion underdogs. They view the Palestinians as oppressed by Israel's "occupation," as well as being denied self-determination, which is merely a thinly-veiled smoke screen for the first step of their goal of Israel's destruction. We also cannot ignore anti-Semitism, which has been around for two millennia. Add in traditional left-leaning media reporting, and the world's addiction for oil, it's fairly easy to see why Israel is the object of prejudice, where unreasonable becomes reasonable and the unacceptable becomes acceptable.

One might ask: Why is there a distinct absence of common sense regarding this morally abhorrent dilemma? I can still hear the wise words of a family member many years ago who said "the problem with common sense is - it's too uncommon."