The spring that wasn’t

Op-ed: Peace won’t be achieved as long as hate for Israel not tamed by Palestinians' personal pursuit of happiness

When in December 2010 Tunisians took the streets and by the sheer force of a civil society grass root movement overthrew former President Ben Ali, the world looked with admiration at the region and pondered the beginning of a new phase. The subsequent fall of Egyptian President Mubarak and the Libyan revolution led analysts to think that what was being commonly called the Arab Spring might also represent an overall Arab awakening; the opening of a fresh period in the history for the Arab Middle East where democracy oriented forces would act consistently to take down lifelong authoritarian regimes.

The self-entertained western hubris of a swift glasnost and perestroika style opening of Arab regimes has been effectively shattered by an ensemble of events. The barbaric killing of an American ambassador in Benghazi, the repeated ambiguity by members of the Egyptian parliament over their willingness to uphold the peace treaty, the increasing presence of Jihadist elements in Syria along with the growing pressure felt by the Hashemite royal family in Jordan are all events and situations which highlight one trend of receding security, instability and political turmoil.

Upgraded Status
Real meaning of UN vote
Dan Calic
Op-ed: By upgrading PA's status, UN disregarded its own charter and proved itself unfit to fairly judge Israel
Real meaning of UN vote
For that reason, a straightforward look at the deteriorating Near Eastern regional complex is essential in order to adapt the way strategic thinkers, analysts and policymakers address political and defense related situations. In addition to that, following Hamas' attacks on Israel and the UN vote on the PA statehood bid, it is interesting to subject the weak concept of "Arab Spring" to the prolonged situation of socio-political stagnation both in Gaza and in Judea and Samaria.

The first point to address is the quasi delusional state in which a majority of Western governments have entered in regards of Syria and Egypt. It is certain that the courage of those who took the streets in Tahrir square and in Dera’a, Homs and other Syrian cities in early 2011 should be honored, nevertheless the spontaneous and laudable initial demonstrations should not blindside the way European powers and the US approach and understand the region. The Egyptian government and parliament are obviously suffering from a schizophrenic situation.

The power majority given to the Muslim Brotherhood is problematic in more than one way. The grassroot movement has maintained over the years a clearly anti-American, anti-Israeli and anti-Semitic set of policies, yet now they feel the need to accommodate their worldviews with semi-pragmatic policies in their direct and indirect dealings with the White House and the State of Israel.

While these problems influence the decision making process, Egyptian youth keep on demonstrating against the political establishment as they consider the revolution hijacked by the Islamists and their value system.

The result of such a crisis is the creation of grey areas such as the terrorist presence in the Sinai and the increase and unchecked military and logistical support provided to Hamas, which are to be considered as a major risk for the peace and security in the region. 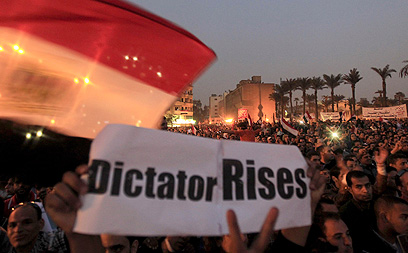 In the meantime, Western powers sugarcoat the Syrian civil war which is increasingly becoming a regional proxy war and the potential center for wider instability. The number of Jihadist factions opposing the complex alliance system between opposition factions illustrates the irrelevance of the quasi-surreal support given by France, Germany, the UK and the US to actors in a conflict which is highly unlikely to provide any favorable result in the medium term for American, European or Israeli national interests. In direct relation to the Syrian crisis, Lebanon presents a situation of complete political stagnation. Following a string of violence orchestrated by the Assad regime and encouraged by Hezbollah the country is surviving in a tense environment while bracing for the possible troubles ahead of 2013 elections.

In this sense, Egypt, Syria and an emboldened Lebanese Hezbollah are increasingly representing a threat to Western interests in the region and overseas while maintaining an aggressive, either overt of covert, stance toward Israel. Such a situation, regardless of how it started and the intentions behind it, cannot be treated through an idealistic lens based on wishful thinking anchored in the hope of a peaceful and democratic Middle East. In addition to the situation in Gaza, Judea and Samaria are the regions which should be considered as the real test to the theory of the Arab awakening as they would have had the more to gain and arguably the most grievances to avenge. The inevitable vote at the UN for a Palestinian non-member state bid is emblematic in the limits of the so-called Arab Spring. The capacity and willingness of Palestinians to accept decades of mafia-like style of politics by the PA and authoritarian rule by Hamas put the concept of "awakening" through a serious questioning. While the PA has been mismanaging international donations and squandering its chances of economic takeoff, Hamas' internal power struggle has led to further death and destruction for the people it is supposed to protect. The failure by the Palestinians to take the streets against two movements which have greatly harmed their interests along with their chances of peace is to be taken extremely seriously. Regardless of Abbas' possible inclination for negotiations with Israel or the current shift of doctrine inside Hamas, the Palestinians remain more inclined to sacrifice their interests in order to wage a fight against the Jewish State. In this sense, the hubris of a democratic and peace oriented Middle East is further diminished by the incapacity of a population to renounce to a status quo which resulted in years of violence and deaths. As long as the hate for Israel will not be tamed by the personal pursuit of happiness and individual freedoms of single Palestinians, real peace won’t be achieve. Mahmoud Abbas' move to the UN is an explicit proof of the inherent limits of the so-called ‘spring,’ as its action will benefit none of the regional players, with the exception possibly of Iran that will further cash-in on the frustration of Palestinians abused by their leaders’ ineffective policies. Western governments are losing precious time ineffectively following the ideals which they have themselves used to coin the shifts tacking place in the Near East. The French support for the Palestinian bid at the UN substantiated the overall misunderstanding governments and civil society organizations have been building up regarding the Near East. Partial support for Egypt's democratic movement, halfhearted measures to arm some Syria’s rebel factions and the sponsoring of a PA initiative bound to fail are the textual proofs of how much the Western European powers and the US have bought into “spring” rhetoric, which in fact has not been followed by the much anticipated "awakening." Riccardo Dugulin holds a Master degree from the Paris School of International Affairs (Sciences Po) and is specialized in International Security. He is currently working in Paris for a Medical and Security Assistance company. He has worked for a number of leading think tanks in Washington DC, Dubai and Beirut. Personal website: www.riccardodugulin.com