Op-ed: Mashaal's anti-Israel speech in Gaza was predictable, but it does not leave much room for optimism

The speech delivered by Hamas leader Khaled Mashaal over the weekend was just as predictable. His harsh comments against the State of Israel were expected. Any other speech would have come as a surprise. Nevertheless, we must take the speech seriously. Mashaal certainly meant it when he said "Palestine is ours and we will not recognize Israel" or "We will liberate Palestine – centimeter by centimeter."
Indirect Talks
Choosing Hamas
Alex Fishman
Op-ed: Netanyahu government keeping understandings with Hamas under wraps due to electoral concerns
Choosing Hamas
Israel's leaders must view these comments as a real threat. Yesterday in Gaza peace moved further away from the Israeli border. Mashaal's comments coincide with the atmosphere that has taken over the Muslim sphere in our region, with the Muslim Brotherhood seizing every country and organization.

We may have been able to let out a sigh of relief if "we will not recognize the legitimacy of the occupation" would have been Mashaal's harshest comment. More prominent Muslims have said this before.

But the Hamas politburo chief went on to say that "we will never recognize Israel" and called on the Palestinians to continue in the path of resistance, jihad and martyrdom in Gaza and the West Bank. He left the proponents of peace empty handed, at least temporarily. 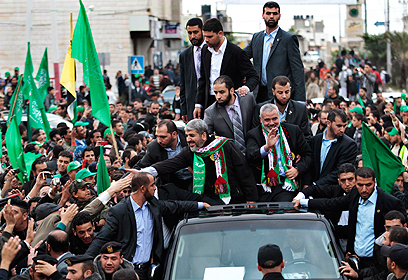 Mashaal and the rest of Hamas' leaders are bitter enemies of Israel, and we should hope and believe that at some point down the line they will be removed. This does not mean that their successors will be any better.

Mashaal and his friends are burying the dreams of peace, but we must always keep in mind that "peace is made with enemies," and Israel has negotiated with Hamas recently, though not directly.

A free and happy Gilad Shalit lit the first Hanukkah candle yesterday due to those Israelis who did not hesitate to conduct indirect talks with Hamas. The rule is that when people talk they don't shoot.

The day will come – and it is probably not far off – when we will have to talk to Mashaal and his friends. In any case, Peace Now Secretary-General Yariv Oppenheimer still has a lot of work ahead of him.