Until the next tragedy

Op-ed: Americans not willing to tackle real problems behind tragedies such as Newtown massacre

Initially it was reported that one person injured. The second report said two people were killed. This is still not big news in America on a Friday morning. In Chicago two children are killed from gunfire every weekend and know one knows about it, but when the numbers climbed to 10, 12, 18, 20 - almost all of them small children - even America stopped everything and did what it does best together – weep.

The story about the boy who asked his teacher to go home early so he could help his mother decorate the Christmas tree broke through the last defenses of the Americans, who are used to the tragic cycle of life in a country that is as crazy as it is wonderful.
US-Israel Ties
We're losing America's Jews
Yitzhak Benhorin
Op-ed: Israelis may wake up to reality of one state for two peoples and find that US Jews have abandoned them
We're losing America's Jews

Every American president has at least one moment in which he looks into the nation's grieving eyes and tries to comfort it after an unimaginable disaster. Ronald Reagan had the "Challenger" disaster, for Bill Clinton it was the Oklahoma City bombing, George W. Bush had 9/11, and now Barack Obama has Newtown, Connecticut.

The problem is that if the president will not find a way to do something about the fact that American citizens own some 200 million weapons and can purchase bullets on every street corner, he will have a few more of these moments in the next four years; moments in which he will stand there, teary-eyed, thinking about his daughters and trying to find words when there really is nothing to say. 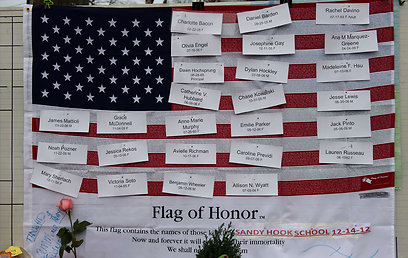 Because there are no words to describe what it feels like to hear that so many young children were murdered in a classroom by an automatic rifle that is used in the war in Afghanistan. There is also no point in trying to figure out what goes through the mind of someone who does such a thing. But we should talk about what leads to such tragedies, which have been growing in frequency in the US since 2007 and do not just come out of nowhere.

America just sweeps everything under a rug of tears and moves on, until the next tragedy; until the next child who will never open the gift that is waiting for him under the Christmas tree.


פרסום ראשון: 12.16.12, 19:50
commentsend to friendshareshare
See all talkbacks Close all talkbacks
new comment
Next
Previous
Warning:
This will delete your current comment
cancelOk