Op-ed: UN Human Rights Council's noble principles not being applied equally when it comes to Israel

Have you ever given much thought to the United Nations and whether it's fulfilling the principles of its charter with equality? Has it occurred to you that this organization, which in theory is supposed to be an unbiased adjudicator of justice, is at times anything but, especially when it comes to Israel?

A closer look at the UN, its charter and how the organization actually functions provides some interesting revelations. To set the tone, here are some quotes from its charter:

These quotes reflect principles which most people would agree sound noble. Yet are they being applied equally when it comes to Israel? For this we'll take a look at one of the more visible and vocal groups within the UN - the Human Rights Council.

It is made up of 47 member states elected from the General Assembly. Each council member serves a three year term. The council is divided into five regions. The breakdown of seats from each region is: Africa 13, Asia 13, Latin American/Caribbean 8, Western Europe/other States 7 (includes the US), Eastern Europe 6.

Since Africa and Asia each have 13 seats, the combination of both (26) would provide a majority vote. This becomes quite significant since virtually every nation which is at least 60% Muslim is in these two regions. These two regions could easily be characterized as a voting bloc.

Another noteworthy topic is the UN budget. The largest contributor is the United States by far, at 22%. Yet the nations which provide the smallest contributions are among those who consistently vote against the US, which in many cases ends up against Israel. They include Syria - 84% anti-US record, Lebanon 80%, Egypt 79%, Libya 76%, Pakistan 75% and Saudi Arabia 73%.

The top 20 countries who have voted against the US at least 65% of the time are all in the African or Asian region. Their combined 26 seats give them a 55% majority. It's worth noting that in spite of Egypt's overwhelmingly anti-US voting record (79%) America provides them an average of almost $2 billion in annual financial support. Plus, Saudi Arabia (73%) has received more than $80 billion in military weapons and technology since 1950, with another $6 billion in the pipeline.

With the US providing almost $1 out of $4 for the entire UN budget, is it fair their voting privileges are the same as Egypt for example, which supplies less than 1% and votes against the US 79% of the time? The answer would seem obvious, except this is the UN. 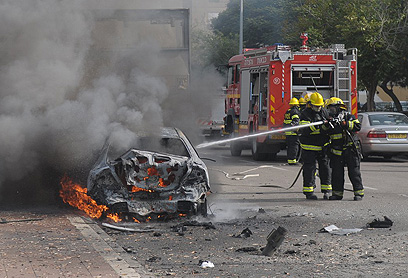 Damage from rocket attack on Ashdod during Pillar of Defense (Photo: Avi Rokach)

So what does all this mean? When it comes to Israel it means quite a bit. For one, Israel has never served as a member of the UNHRC. Moreover, Israel has been the target of at least 33 critical resolutions passed by the UNHRC since its formation in 2006. No other nation has had more than one issued against it.

With the council's two largest regions controlled by Muslim majority countries, it's obvious why Israel has been a consistent target.

A look at the countries who have served on the UNHRC rights is also worth noting. They include Libya, China, Pakistan, Saudi Arabia, Tunisia, Egypt and Angola. Ironically, each of them are well known human rights violators.

How can a committee whose stated purpose reflected in the aforementioned quotes include members who flagrantly violate the very principles the council is charged to uphold? Moreover, how does Israel, which is the only democratic country in the Middle East where human rights are protected under the law become the single most targeted country of said UN council?

Maybe the time has come to take a hard look at the UN in general and specifically the UN "Human Rights" Council, with some tough questions.

For example, when the tiny country of Israel is victimized by terror attacks resulting in the deaths of over 3,000 innocent civilians since its formation in 1948, why is the UN silent? When more than 10,000 rockets are fired at Israeli cities from the Gaza Strip, specifically meant to kill civilians, why is the UN silent? What kind of message does it send when the General Assembly overwhelmingly votes to upgrade the status of 'Palestine' to de-facto statehood, when its leader belongs to a party committed by its charter to the destruction of an existing member of the same body? Have you ever heard the saying "the pot calling the kettle black?" An honest assessment of the UNHRC would seem to warrant a name change to 'Inhuman' Rights Council.